Over the years, Google started introducing multiple features on different applications to have fun with more users at a time. 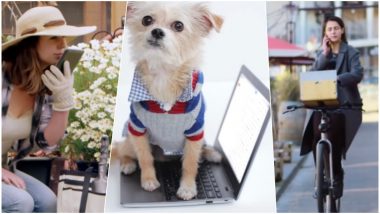 Its the day of pranking everyone, the April Fools' Day. April 1 everywhere is a fun day getting all silliness out of people. It involves making fun and playing pranks on everyone. The day has become so popular that it is not limited to just people anymore. Search giant Google plays a prank on its users each year. Every year on April 1, Google introduces some new features to prank its users. And most of the people fall for its trick. Like Google, several other media platforms also join in by making up some news to fool the audiences. Google has been playing the April Fools' Day jokes since the year 2000. Best April Fools' Day 2019 Pranks: Unique and New Ideas to Trick Your Friends, Family or Colleagues on April 1.

2000: This was Google's first April Fools' Day hoax. It asked users to stare at an animated GIF and project a mental image of what they wanted to find in it. The results displayed several error messages later. These were funny messages asking users to rethink or silence the voices in the head.

2002: Google revealed the technology behind PageRank Systems- PigeonRank. It spoke about the trainability of domestic pigeon and how its capacity recognizes objects. The article made many humorous puns based on computer terminology and how the page ranking system actually works.

2006: In 2006, Google created a parody online dating called Google Romance. It offered a soulmate search to the users and asked them to make a Google Romance profile. Once the users clicked on it, it gave error messages, some of which linked to April Fools' jokes. Here's a tour of the Google Romance Prank.

2007: Google announced a new service called Gmail Paper. It allowed users to e-mails to a 'Paper Archive' which Google would print and mail via traditional post. It was a free service announced with red adverts printed on the back of printed messages.

2008: On 1st of April, Google's blogging service Blogger featured an announcement for Google Weblogs, or "GWeblogs," or "Gblogs," as a new revolution in publishing. It listed a series of features and then asked the users to click on a video tour. On clicking on the video, it took the user on a clickbait video rickrolling, Rick Astley song Never Gonna Give You Up.

Watch Video of Application for Virgle:

2009: On April 1, Google announced a new technology of "Cognitive Autoheuristic Distributed-Intelligence Entity". CADIE technology as it was called would help users to interpret the data obtained from each ball to provide useful tips to owners.

2010: On April 1, Google jokingly announced that it was changing its name to Topeka and even changed its name on the homepage to Topeka. This was in response to Topeka city's attention stunt to change its name to Google in the month of March same year. Topeka wanted to capture a spot in Google's new broadband/fiber-optics project.

2011: The video player YouTube added a button which would apply a video filter to the video and replace the audio with a recording of Rhapsody Rag. It was background music played in silent movies in 1911.

2013: On April 1, Google made an addition of "Add new awesome application" button which was immediately taken down on the next day.

2014: On April 1, Google created an entry in their careers page looking for a dogengineer.

2016: On April 1, a new feature called Mic Drop was added to Gmail. It archived the email message as soon as it was sent and inserted a GIF of Bob the Minion, a character from the Despicable Me film series. But it backfired when people were not impressed with the idea. Many complained about sending GIFs on business emails.

2017: Google introduced new Pac-Maps to allow users to play Pac-Man. The player was taken to a random spot in the world to continue the game.

2018: On 1st of April, Google Cloud launched a "hummus API" to organize information, even hummus. It attempted to store their favourite information as hummus.

2019: On this year's April Fools' Day, Google introduced the Google Maps Snake game. Mobile game 'snake' has been one of the oldest games and Maps decided to go old-school this year. The user will have to tap on the Play Snake feature and they can choose the destinations on the map to play the game.

Over the years, Google started introducing multiple features on different applications to have fun with more users at a time. This is the list of all the pranks that Google has played on the internet and trolled the users in different parts of the world.  Gmail, Google Books, Google Docs, YouTube, Google Voice, Google Assistant are some of the applications which had simultaneous pranks for people on April 1.  So this year, if you get a notification or observe something new around these devices, recheck the date and don't end up being a fool. Google's April Fools' Day jokes are quite popular since they have been doing it since years now.

(The above story first appeared on LatestLY on Apr 01, 2019 12:38 PM IST. For more news and updates on politics, world, sports, entertainment and lifestyle, log on to our website latestly.com).