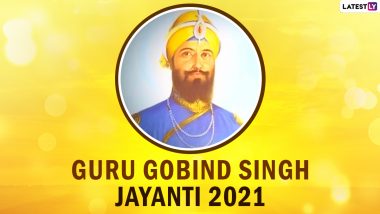 Guru Gobind Singh became the leader of the Sikh faith when he was just nine years old, following the death of his father Guru Tegh Bahadur. Guru Gobind Singh made some great contributions to the culture of Sikhism, like initating the Khalsa order, which is a strict moral code of spiritual discipline. He included the tradition of covering one's hair with a turban. He gave a great guidance and inspiration to the people and also fought against injustice. Guru Gobind Singh Ji was not just a spiritual leader but a great poet and philosopher. He left a great impact on his followers and his birth anniversary is thus celebrated with great enthusiasm, special prayers and so on. 5 Teachings From Guru Granth Sahib, The Holy Book of Sikhs.

On the day of Guru Gobind Singh Jayanti, people visit Gurudwaras and pray for peace and prosperity of everyone. On this holy day, people also recite his poems, attend satsangs of his teachings and offer special prayers. A lot of Sikh families also take part in charity events like giving food to the needy. Gurudwaras also hold lectures on his teachings and poetry recitals. Special prasad is prepared for this day. At some places, large processions are also held where people participate with singing devotional songs.

(The above story first appeared on LatestLY on Jan 17, 2021 04:28 PM IST. For more news and updates on politics, world, sports, entertainment and lifestyle, log on to our website latestly.com).