So that was the complete Hindu calendar 2019 replete with important religious fasts, festival dates and national festivals. While most of the calendars put more focus on covering the major Hindu festivals such as Diwali and Holi, but the calendar above gives an in-depth information on vrat dates and timings. 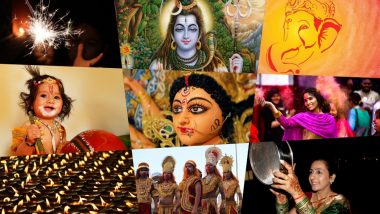 It is Happy New Year 2019! After having a blast on New Year's Eve bash, we welcomed the New Year with much joy and excitement. One commonly observed ritual in most Hindu households is visiting temples and praying to deities. And then as many of you should be aware of is looking into Hindu calendars to check for the upcoming fasts and festivals. Some of the popular Hindu calendars or almanacs are Kalnirnay, Lala Ramswaroop, Drik Panchang, as people search for dates of both festivals (tyohar) as well as fasts (vrat). Hindu calendar is a collective term for the various Hindi lunisolar calendars traditionally used in India. It is used to set dates of major Hindu festivals such as Vasant Panchami, Holi, Maha Shivaratri, Vaisakhi, Raksha Bandhan, Pongal, Onam, Krishna Janmashtami, Ganesh Chaturthi, Durga Puja, Dussehra, Ram Navami, Vishu and Diwali. Apart from Hindu festivals, there are major fasts (both observed monthly and annually) such as Ekadashi, Masik Shivaratri, Sankashti Chaturthi, Rohini Vrat, Pradosha Vrata, Masik Durgashtami and more. For New Year 2019, we bring to you Hindu Calendar 2019 for free download in PDF format. This contains a list of bank holidays, national festivals, long weekends, festivals, and significant events beforehand. Wish you a very Happy New Year’s 2019.

Vasant Panchami also known as Saraswati Puja falls on February 10. It is the only major Hindu festival of the month, but there are a number of events, international days and anniversaries. The most popular one being Valentine’s Day on February 14. Chinese New Year 2019 will be on February 5. Maharshi Dayanand Saraswati Jayanti and Guru Ravidas Jayanti will be celebrated. The monthly fasts (vrat or upvas) are Masik Shivaratri, Pradosha Vrata, Ekadashi Vrat, Kumbha Sankranti, Sankashti Chaturthi and Magha Amavasya will be observed.

March is all about waiting for planning the Holi celebrations. But before reaching the Holi 2019 date, Vijaya Ekadashi Vrat is the first fast of the March 2019 on 2nd. It will be followed by Pradosha Vrata and Maha Shivaratri on 3rd and 4th. Maha Shivaratri means  "the Great Night of Shiva" In the second week, we have Ramakrishna Jayanti and International Women’s Day celebrated on March 8. Holi will be celebrated on March 21 while Holika Dahan will take place a day before on March 20. Zoroastrians will commemorate Persian New Year or Nowruz in India on March 21, the Vernal (Spring) Equinox date. Shaheed Diwas or Martyr’s Day to remember the great men and women who sacrificed their lives for the country is observed on March 23. Among the other big days are Hazarat Ali's birth anniversary, Shivaji Jayanti and Chaitanya Mahaprabhu Jayanti.

April is full of major festivals. Beginning with the nine-day Chaitra Navratri festival starting from April 4 and continue until 14. Celebrated in honour of Goddess Durga, it the second most important Navratris after Sharad Navratri. Springtime festivals such as Gudi Padwa marks the traditional New Year for Marathi Hindus in Maharashtra. Ugadi is the New Year's Day for the people of Andhra Pradesh, Telangana and Karnataka. Cheti Chand is a festival marking the beginning of the Hindu New Year for the Sindhi Hindus. Vaisakhi or Baisakhi marks the Sikh New Year. Ram Navami and Hanuman Jayanti, the birthday celebrations are another big festivals of this month.

The fifth month begins with International Worker’s Day or May Day. May 1 is also observed as Maharashtra Day or Maharashtra Diwas for which holiday is declared in the state. Other important days are Mother’s Day and World No Tobacco Day. Significant celebrations in this month will take place on Akshaya Tritiya or Akha Teej, the annual spring festival celebrated by Hindus and Jains. Buddha Purnima or Vesak commemorates the birthday of Gautam Buddha.

The biggest festival of June 2019 is Islamic festival of Eid al-Fitr, celebrated at the end of Ramadan, the holy month for Muslims. While there are no major Hindu festivals, there are many religious fasts, international days and birth anniversaries from International Yoga Day to Father’s Day and Nirjala Ekadashi to Kabirdas Jayanti.

Like June, there are not many festivals in July 2019. But Ratha Yatra, a festival commemorated in honour of Lord Jagannath is the major attraction of the month. The monthly fasts of Masik Shivaratri, Kamika Ekadashi Vrat, Sankashti Chaturthi, Pradosha Vrata, Ashadha Amavasya Vrat and Ashadha Purnima Vrat will be observed like the rest of the months.

The frequency of festivals will increase as we enter August. Right in the first week, we have Hariyali Teej celebrated by married women by keeping fast and worshipping Goddess Parvati on August 3. The next day i.e. August 4, Friendship Day will be celebrated. Raksha Bandhan, a festival honouring the loving bond of brothers and sisters will be celebrated on August 15. Again, on the same date, we have year’s second national festival, Independence Day. Krishna Janmashtami, the birth anniversary of Lord Krishna will fall on August 24. Apart from Hindu festivities, Islamic festival of Eid al-Adha and Bakrid will also be celebrated this month on August 12.

The first day of September will see several festivals across religions. We will have Hindu festivals, Hartalika Teej and Onam as well as Islamic New Year, Al-Hijra celebrated on September 1, 2019. The next day onwards, ten-day festival Ganesh Chaturthi celebrated in honour of Lord Ganesha’s birth anniversary will kick-start and continue until Anant Chaturdashi on September 12. The biggest Sankasthi Chaturthi of 2019, Angarki Chaturthi will fall on September 17. Sharad Navratri 2019 will also begin in the last week of the month, from September 29 onwards. Several days such as Teacher’s Day, Hindi Diwas, Engineer’s Day, among others will fall in this month.

Sharad Navrati, the most significant of all Navratris, celebrated in honour of Goddess Durga will continue in October 2019. Big days within this festival such as Navpatrika Puja, Durga Ashtami and Maha Navami will be celebrated on November 5 and 6 respectively. Hindus’ biggest festival, Diwali or Lakshmi Puja will also fall in this month and related days such as Dhanteras, Naraka Chaturdashi, Govardhan Puja and Bhai Dooj will be all celebrated. Karwa Chauth, popular festival observed by married women also falls in October.

We reach the last month of the year, December 2019. It will begin with an annual international observance, World Aids Day on December 1. But as we all know the major attractions of the month remains Christmas and New Year’s Eve. While there are not many Hindu festivals, there are several fasts such as Vivah Panchami, Gita Jayanti, Rohini Vrat, Karthigai Deepam, Dattatreya Jayanti. These are in addition to the monthly fasts of Ekadashi, Shivaratri, Durga Ashtami, and Sankashti Chaturthi.

Shortest Day of the Year

So that was the complete Hindu calendar 2019 replete with important religious fasts, festival dates and national festivals. While most of the calendars put more focus on covering the major Hindu festivals such as Diwali and Holi, but the calendar above gives an in-depth information on vrat dates and timings. You can download the Hindu calendar 2019 for free in PDF or JPEG format with all inputs from trusted calendars such as Drik Panchang, Kalnirnay, Lala Ramswaroop Panchag information online.

(The above story first appeared on LatestLY on Jan 01, 2019 01:36 PM IST. For more news and updates on politics, world, sports, entertainment and lifestyle, log on to our website latestly.com).