Indian Coast Guard Day is celebrated every year on February 1. The year 2020 marks the 43rd raising day of the Indian Coast Guard (ICG). The force protects India's maritime interests by enforcing maritime law over the territorial waters of India. The ICG operated under the Ministry of Defence. 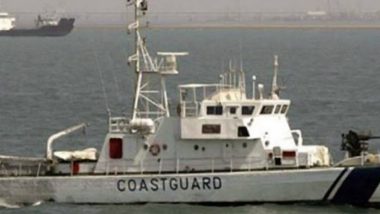 The ICG is a multi-mission organisation, which has a wide range of task capabilities for both surface and air operations. It works in close cooperation with the Indian Navy, the Department of Fisheries, the Department of Revenue (Customs) and the Central and State police forces. The Director-General Indian Coast Guard heads the force. Vice Admiral VA Kamath of the Indian Navy was appointed the founding Director-General of the force. Offshore Patrol Vessel ICGS Vikram Made Under 'Make in India' Arrives at New Mangalore Port.

For effective command and control, the Maritime Zones of India are divided into five Coast Guard Regions - North-West, West, East, North-East and Andaman & Nicobar. There are currently 42 Coast Guard stations along the coastal line of the country. Along with this, the force also has five air stations and 10 air enclaves.

Every year, several programmes are organised at the Coast Guard headquarters commemorate the raising day of the force. Last year, as part of the Indian Coast Guard Day celebrations, a mega event, "Storm Rider Fitness Challenge" was conducted at the VIT Chennai campus. The event was aimed at spreading awareness about sports and fitness among the public.

(The above story first appeared on LatestLY on Feb 01, 2020 08:00 AM IST. For more news and updates on politics, world, sports, entertainment and lifestyle, log on to our website latestly.com).