International Day of the Seafarer 2021 Date and Theme: Know History and Significance of the Day Recognises Invaluable Contribution of Seafarers 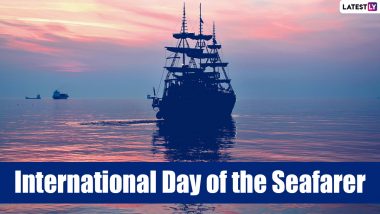 International Day of the Seafarer 2021 Date and Theme:

As mentioned, the IMO observe every June 25 as the Day of Seafarer. In 2021, the occasion falls on Friday.

The theme for 2021 Day of the Seafarer “Seafarers: at the core of shipping’s future”. The theme "seeks to increase the visibility of seafarers by drawing attention to the invaluable role they play now and will continue to play in the future."

International Day of the Seafarer History and Significance:

This day was first celebrated in 2011, "following its establishment by a resolution adopted by the Conference of Parties to the International Convention on Standards of Training, Certification and Watchkeeping for Seafarers (STCW), 1978, held in Manila, Philippines, in June 2010, which adopted major revisions to the STCW Convention and Code." The Day of the Seafarer has also been included in the annual list of United Nations Observances.

The occasion provides us with an opportunity to pay tribute to seafarers worldwide for their contribution to the world economy. The day also gives us an opportunity to educate people about issues faced by the modern-day seafarer. But most importantly it is a day to say thank you to seafarers.

(The above story first appeared on LatestLY on Jun 24, 2021 11:29 AM IST. For more news and updates on politics, world, sports, entertainment and lifestyle, log on to our website latestly.com).