International Day of Yoga 2021 will be celebrated on June 21. Read on to know about the significance, theme, and other importance about celebrating the ancient Indian practice of yoga. 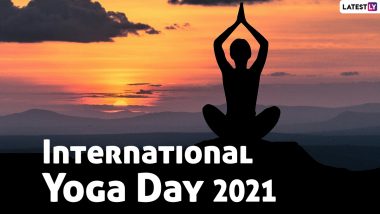 For several years many people are practising yoga on a regular basis to connect the body, mind, and soul. It is a very important form of exercise. Yoga has brought spiritual and physical prowess to the world stage. Thus, one particular day is specially designated to celebrate the ancient form of exercise. Every year, to celebrate the special form of exercise, the International Day of Yoga is observed by millions across the world on June 21. Yoga has several health benefits and thus, millions practise it on a daily basis.

On September 27, 2014, Prime Minister Narendra Modi proposed the idea of celebrating International Yoga Day during his speech at the UN General Assembly.  Later, on December 11, 2014, India's Ambassador Ashok Mukherjee introduced the draft resolution in the United General Assembly. Interestingly, the draft resolution received huge support from 177 Member States. After that, the United Nations designated June 21 as International Day of Yoga by resolution 69/131.

When is International Day of Yoga 2021? What is The Yoga Day Date?

International Yoga Day is annually celebrated on June 21 and once again it will be celebrated across the world on the same date, June 21, 2021, which is a Monday.

What is the Theme of International Day of Yoga 2021?

As the whole world has been suffering from the coronavirus pandemic since last year; thus, this year’s Internation Day of Yoga theme is 'Yoga for Well- being'.  Last year, the theme was 'Yoga at Home and Yoga with Family'. The main objective behind this year’s theme is to highlight the benefits yoga has on human health. It is not only beneficial for alleviating chronic pain or improving flexibility it is also highly beneficial for mental health. During the pandemic, yoga is giving us the rays of hope to stay fit and relaxed. Therefore, this year’s theme is appropriate that focuses on the contribution of yoga to the physical and mental health of an individual.

What is the Significance of the International Day of Yoga?

The special form of exercise Yoga is considered to be an ancient practice that originated 5,000 years ago in India. The word ‘Yoga’ derived from the Sanskrit language and the meaning of yoga is to unite or join. To be close to enlightenment, yoga was developed in a way to unite the mind, body, and soul. On June 15, 2015, the first International Day of Yoga was observed globally. The ministry of Ayush, India, organized a program in which PM Modi along with dignitaries of 84 nations participated. On that day, around 35,985 people performed 21 yoga poses at Rajghat, New Delhi.

This year, the United Nations statement read as, “A growing trend of people around the world embracing Yoga to stay healthy and rejuvenated and to fight social isolation and depression has been witnessed during the pandemic. Yoga is also playing a significant role in the psycho-social care and rehabilitation of Covid-19 patients in quarantine and isolation. It is particularly helpful in allaying their fears and anxiety.”

(The above story first appeared on LatestLY on Jun 17, 2021 01:24 PM IST. For more news and updates on politics, world, sports, entertainment and lifestyle, log on to our website latestly.com).