International Women's Day 2018 Theme: Date, Importance And Why it is Celebrated 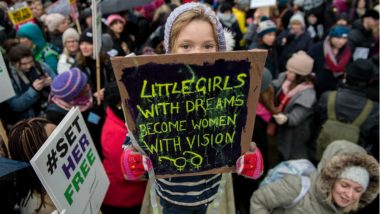 International Women's Day 2018 is observed on March 8 every year celebrating women and their contributions to the society. Women's day commemorates the movement for women's rights and the role of women in it. The day highlights women who contributed to the uplifting of other women and thus the society. Women's Day was first observed on February 28, 1909, in New York. Later, International Woman's Conference in 1910 suggested that March 8 become 'International Woman's Day'. Thereafter, women gained suffrage in Soviet Russia in 1917 after which it became a national holiday in the country.

Then the socialist movement and communist countries started celebrating the day until it was adopted by the United Nations in 1975. During its observance in 1909 around 15,000 women marched through New York City demanding voting rights, equal pay and shorter working hours.

Prime Minister Narendra Modi in his latest Mann ki Baat address touched upon the issues of daily safety, women empowerment and "technology for welfare". He said that on Sunday his dream of 'New India' was the one where women were strong and empowered and equally contributed to the country's development.

Clara Zetkin, leader of the 'women's office' for the Social Democratic Party in Germany tabled the idea of an International Women's Day in 1910. She suggested that to push women's demands every country should celebrate women on one day every year.  More than 100 women from 17 countries agreed to her suggestion and IWD was formed.

On March 19, 1911, it was celebrated for the first time in Austria, Denmark, Germany, and Switzerland. Following it was decided to change the day of celebration to March 8, and it has been celebrated on that day ever since. After United Nation's recognition, they decide a theme around the day. In 2011, former US President Barack Obama proclaimed March to be 'Women's History Month'. At Latestly, we have compiled a list of messages to send the woman in your life on this beautiful day.

Why Women's Day is celebrated

The aim to achieve gender equality for women across the world has not been achieved. The gender pay gap is one of the issues that show how the pay scales differ on the basis of gender. According to a 2017 report by the World Economic Forum, another 100 years will be required for global inequality gap between men and women to disappear entirely.

The theme for International Women's Day 2018 is #PressforProgress. IWD 2018 promotes growing global movement of supporting surrounding gender parity and sexism. This year's theme also encourages women to raise voice for their rights. Also, check out our list of powerful quotes by popular women.

In 2017, women's issues dominated the news majorly with the allegations of sexual harassment on Hollywood filmmaker Harvey Weinstein. #MeToo gave voice to a movement on social media that saw a widespread surge in women's movement and also highlighted how they are treated by men who dominate them or are in power.

(The above story first appeared on LatestLY on Mar 07, 2018 07:10 PM IST. For more news and updates on politics, world, sports, entertainment and lifestyle, log on to our website latestly.com).