Kerala Piravi is celebrated to commemorate the birth of Kerala as an independent state in the Republic of India on Nov 1, 1956. People of Kerala observe the day with varying celebrations. The day is observed with special events in schools too. As Kerala Piravi 2020 approaches, we bring to you 5 ways in which you can observe the occasion online. 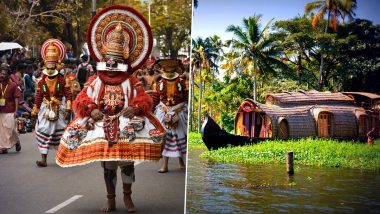 Kerala Day or Kerala Piravi is celebrated to commemorate the birth of Kerala as an independent state in the Republic of India on November 1, 1956. It commemorates this union that led to the formation of modern-day Kerala. People of Kerala observe the day with varying celebrations. The day is observed with special events in schools and colleges. However, this year celebrations have been curtailed due to COVID-19 pandemic, but virtual celebrations will take place. As Kerala Piravi 2020 approaches, we bring to you five ways in which you can observe the occasion through online medium. Kerala Piravi Speeches in Malayalam and English: Talks On Kerala's History, Customs, Traditions, Social Advancement and Progress (Watch Videos)

Earlier, Kerala was divided into three independent provinces of Malabar, Cochin, and Travancore. Malabar Presidency constituted the northernmost territories of Kerala that included Thalassery, Kannur, and Kasaragod. The princely State of Cochin occupied the middle section, and the sovereign State of Travancore administered the southern region. After India became independent, there arose a need to divide regions to new states based on the languages people speak. A few years after independence, Kerala was reorganised as one such independent state. Kerala Piravi Day: 7 Beautiful Malayalam Songs That Celebrate the Charm and Diversity of God’s Own Country.

Your family can come together and prepare a group dance on a Malayam song to dance on Google Meet, Zoom, live YouTube links or through other mediums. You can choose from Kaikottikali, Oppana or other dances.

You can sing your favourite Malayalam song while it can be a movie song, a traditional one that invokes the Malayalee feeling will bring in a special feeling. It could be Syama Sundara Kera Kedara Bhoomi or another song of your choice.

The language Malayalam is known for its rich literature blessed by the work of well-read writers and poets. You can choose to read the poems of some of the famous poets like ONV Kurup, Kunjan Nambiar or Kumaran Ashan Mahakavi.

You can read out a speech on Kerala explaining its rich and varied culture and heritage. From the beauty of God's own country, food and its diversity, you can prepare a speech to deliver on Kerala Piravi. Kerala Piravi Images & Wishes in Malayalam For Free Download Online: Send Happy Kerala Formation Day Greetings and Kerala Piravi Ashamsakal GIF Messages.

Participate in the virtual events wearing the traditional Kerala attire of mundu and women can drape the tradition kasavu saree with the golden border.

Quite a lot of celebrations have become online now due to the pandemic and here are a few ways in which you can celebrate the day this time. We wish you a Happy Kerala Piravi!

(The above story first appeared on LatestLY on Oct 28, 2020 05:14 PM IST. For more news and updates on politics, world, sports, entertainment and lifestyle, log on to our website latestly.com).