Labour Day 2020 in New Zealand: Date, History and Significance of The Observance

The history of Labour Day in New Zealand goes back to 19th century. The struggle for labour rights in the island nation predates the union movement that began in Europe. It was in the year 1840, when a carpenter identified as Samuel Parnell won the right to work for only eight hours in a day in Wellington. 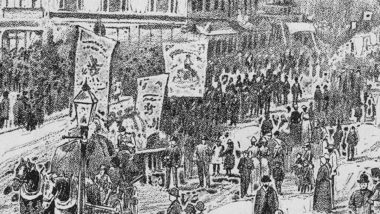 Wellington, October 25: Labour Day, a festival of proletariat celebrated in most parts of the world on May 1, is observed on another date in New Zealand. In the South Pacific nation, the day honouring the working class and celebrating the rights accorded to them is observed on the fourth Monday of every October. Here is the date, history and significance of the observance. New Zealand Election Results 2020: Jacinda Ardern Scripts History! 5 Takeaways From Her Dominating Win.

In New Zealand, Labour Day 2020 would be observed on October 28. The date was chosen as the fourth Monday of October falls on the 28th this year. As part of the celebrations, a three-day holiday came into effect from Friday 6 pm, and will continue till 6 am on Tuesday. Kiwis across the nation use this period annually for hosting get-togethers and organising picnics.

The history of Labour Day goes back to 19th century. The struggle for labour rights in the island nation predates the union movement that began in Europe. It was in the year 1840, when a carpenter identified as Samuel Parnell won the right to work for only eight hours in a day in Wellington.

The eight-hour day movement gained pace at the end of 19th century, with then Liberal government being compelled to announce the industrial conciliation and arbitration system in 1890, which agreed that eight hours should be reserved for work, eight for rest and eight for recreation on any given day.

The date of October 28, 1890, was chosen to celebrate the first Labour Day, as it also marked the first anniversary of the formation of Maritime Council, an organisation of transport and mining unions. After the changes made to the industrial law in 1890, New Zealand came to be known as "working man's paradise" and a "country without strikes".

With the onset of 20th century, however, discontent grew within New Zealand due to rising prices, food inflation and non-adherence to the eight-hour working norm in sectors where the unions were absent. The most-affected were farm labourers, seamen, hotels and restaurant workers as they were not represented by unions akin to the industrial workers.

Amid rising discontent, the Liberal government attempted to placate the working class by announcing an official holiday on fourth Monday of October, from the year 1900. Since then, massive parades used to be taken out on this day as industrial unions celebrated the rights they have won through their struggle.

In the next couple of decades, however, the growing commercialisation of Labour Day parades led to a sense of discontentment among the socialists. Several unions also sought more concessions and rights for the labourers, and demanded their applicability to all sectors and not just for industrial workers. The socialists also alternatively pitched the idea of celebrating Labour Day on May 1 -- the date which Left-leaning groups across the world observe as International Workers' Day.

By early 1920s, claim Kiwi historians, Labour Day parades lost the attention they once drew. For most of the New Zealanders, the fourth of Monday became just another holiday. The time of the year when this holiday is observed delights the citizens, as it marks the end of winter and start of spring -- a period which is considered ideal for picnics and vacations.

(The above story first appeared on LatestLY on Oct 25, 2020 03:59 PM IST. For more news and updates on politics, world, sports, entertainment and lifestyle, log on to our website latestly.com).