In every Bengali household, Devi Paksha and Mahalaya start early morning, at around 4 am, annually. Families prepare to welcome Goddess Durga by tuning in to the legendary "Mahishasura Mardini", narrated by Birendra Krishna Bhadra, which plays on the radio. 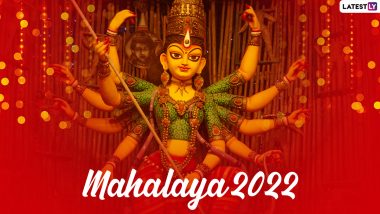 The final day to pay homage to our departed ancestors, i.e. Pitri Paksha marks the beginning of yet another major observance in Hinduism, the Devi Paksha. The period is widely marked by the Bengalis as Mahalaya. Mahalaya 2022 falls on Sunday, 25 September.  It is also known as Sarva Pitru Amavasya. The age-old practice of waking up in the dawn of Mahalaya and tuning in to the radio channel to listen to Birendra Krishna Bhadra's "Mahishasura Mardini" still persists in Bengali households. The 'Era of Goddess' is marked by hearing the Sanskrit recitation of how the Devi Shakti killed Mahishasura, the buffalo demon who was believed to have the godly blessing that a man or a god could not kill him. The 90-minute masterpiece has been broadcasted since 1931 on All India Radio (AIR) in the Indian state of West Bengal.

When Is Mahalaya 2022? Date and Time of Mahishasura Mardini Live Streaming

Mahalaya 2022 will fall on September 25, Sunday. It is also known as Sarva Pitru Amavasya. The notable custom followed in the western states is listening to Birendra Krishna Bhadra's 'Mahishasura Mardini' that will start at 4 am IST on All India Radio Akashvani (AIR Bangla) and other channels.

To usher in the Devi Paksha period and celebrate the blissful festival of Durga Puja, most Bengalis and East Indians wake up in the pre-dawn hours of Mahalaya around 4 am, to be precise, to listen to the holy verses and story of Goddess Durga's decent to the Earth in the voice of radio broadcaster, playwright Birendra Krishna Bhadra. The mythological audio montage consists of devotional songs dedicated to the Devi Durga, classical music and scriptural verses. The landmark composition of  "Mahishasura Mardini" for Mahalaya 2022 will begin at 4 am on Sunday, 25. The live broadcast of the same will be available in the Bengali version on FM Rainbow Network, and for Hindi listeners, the video will go on air on Indraprastha Channel and FM Gold. You can also refer to the below Youtube link of the AIR Akashvani.

The Mahalaya special dawn program on radio creates an atmosphere of assurance, containment and universal love. The tradition has been followed by folks for 90 years now, irrespective of their genders, ages and political orientations. The melody of the heavenly "Mahisasurmardini " has an eternal place in the heart of Bengali as well as Indian culture.

(The above story first appeared on LatestLY on Sep 24, 2022 06:26 PM IST. For more news and updates on politics, world, sports, entertainment and lifestyle, log on to our website latestly.com).