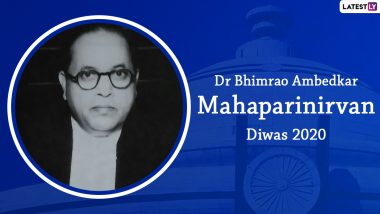 The occasion of Mahaparinirvan Diwas is celebrated every year. It is observed to commemorate the death anniversary of Dr Bhimrao Ramji Ambedkar. Fondly known as Babasaheb Ambedkar, he donned many hats in his illustrious career – economist, jurist, social reformer, and a politician. BR Ambedkar is said to be the Chief Architect of the Indian Constitution. BR Ambedkar was one of the most popular figures in India’s fight for independence, alongside Mahatma Gandhi, Jawaharlal Nehru, and Subash Chandra Bose. If you are looking for more information about the observance of Mahaparinirvan Diwas 2020 – its date, history, and significance, then you have arrived at the right place. 11 Memorable Sayings by BR Ambedkar to Celebrate Ambedkar Jayanti 2020.

What is the date of Dr Ambedkar Mahaparinirvan Diwas 2020?

The national event of Mahaparinirvan Diwas, like every year, will be observed on December 6. This year, it will fall on Sunday. It will be Dr BR Ambedkar’s 64th death anniversary this year.

What is this history of Dr Ambedkar Mahaparinirvan Diwas?

Dr BR Ambedkar was diabetes’ patient in his last years. In the year 1954, he was even bed-ridden due to poor health, for a brief period. In the same time, he also suffered from poor eyesight. The next year, i.e. 1955, his health further deteriorated. It was in the year 1956, Dr BR Ambedkar breath his last in his sleep. on December 6. Since then, his death anniversary is observed with honours every year. Dhammachakra Pravartan Divas 2020 Marathi Wishes: WhatsApp Messages, BR Ambedkar Photos and Quotes to Share on Ashoka Vijayadashami.

What is the significance of Dr Ambedkar Mahaparinirvan Diwas?

Dr BR Ambedkar happens to be one of the biggest social reformers in Indian history. He led the Dalit Buddhist movement from the front and was a strong campaigner of the human rights and equality of Dalits. Babasaheb Ambedkar contributed significantly in India’s fight for independence against the British Raj. BR Ambedkar was the first Law Minister of independent India.

It would be only fitting to pay rich tributes on his death anniversary, and that too in a grand manner. In Buddhism, the term ‘parinirvana’ means a person who has attained nirvana during his lifetime, and even after death. Hence, his death anniversary, on December 6, is observed as Mahaparinirvan Diwas every year, to acknowledge his achievements during his lifetime. Lakhs of grieving people gather at the Chaitya Bhoomi (Dadar Chowpatty Beach in Mumbai), on this day.

From the Prime Minister, to President, Chief Ministers of states, and other prominent people observe this occasion and pay rich tributes and homage to Dr BR Ambedkar. As December 6 nears, we wish Babasaheb Ambedkar’s soul rests in peace, and thank him enough for his contribution in India’s independence, and drafting the Constitution of India, among other things.

(The above story first appeared on LatestLY on Dec 04, 2020 03:12 PM IST. For more news and updates on politics, world, sports, entertainment and lifestyle, log on to our website latestly.com).