Mahashivratri 2021: From Bel Patra to Dhatura, 8 Things To Offer to the Shivling for Having Your Wishes Fulfiled by Lord Bholenath on Maha Shivratri 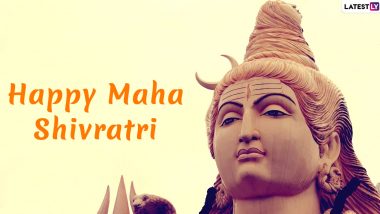 The festival of Maha Shivaratri is here. On this day, the union of Lord Shiva and Goddess Parvati is celebrated with great pomp and show. It is believed that Lord Shiva and Mother Parvati were married on the day of Shivaratri. On this day, Lord Shiva is worshipped with complete holy rituals and fasting is also done. This year, the festival of Mahashivaratri will be celebrated on March 11, 2021 (Thursday). Religious belief has it that by fasting on the day of Mahashivaratri, all the wishes can be fulfilled. Especially, if you worship the Shivling with proper rituals you can get whatever you wish for. But special care should be taken while worshipping Lord Shiva. Do not forget and offer these five things to Lord Bholenath during the prayers.  Mahashivratri 2021 Date, Puja Vidhi, Vrat & Good Luck Rituals: Know More About Shubh Muhurat, Shankar Mantras & Steps to Follow for Bringing in Prosperity to Your Life During Shiv Puja.

A little on what not to do on Mahashivaratri Puja. Lord Shiva should not be offered Tulsi. Tulsi has special importance in Hinduism and it is used in all kinds of worship and auspicious works, but it is forbidden to offer Tulsi to Lord Shiva. Lord Shiva should offer Bela Patra in worship. The use of conch (shaknk) in Shiva worship on Mahashivratri is considered inauspicious. Actually, there is a mythological story behind it. Lord Shiva killed a demon named Shankhchud, who was a devotee of Lord Vishnu. The conch is considered to be the symbol of the same demon, therefore the conch should not be used in the worship of Shiva.

(The above story first appeared on LatestLY on Mar 03, 2021 01:29 PM IST. For more news and updates on politics, world, sports, entertainment and lifestyle, log on to our website latestly.com).