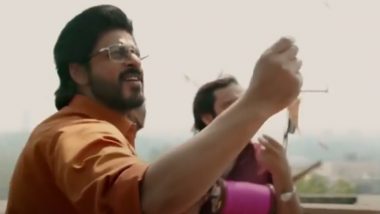 How can a song filmed on Shah Rukh Khan be missed from any festive playlist? The song "Udi Udi Jaye", from the film Raees, is a peppy number sung by Sukhwinder Singh, Bhoomi Trivedi, and Karsan Sagathia.

Do tune into this another song sung by Sukhwinder Singh which features in our list. Filmed on Aamir Khan and Nandita Das, the song "Ruth Aa Gayee Rey", from the film 1947: Earth, perfectly encapsulates the festive spirits of Makar Sankranti. Bonus: The music in this upbeat song is by AR Rahman.

Hello, young lovers! This song is especially for you. The song "Ambarsariya", from the film Fukrey, is picturised in such an appealing manner, that its lyrics and cinematography will leave a lasting impact. You would be hymning this song, sung beautifully by Sona Mohapatra, the entire day, without realising!

Watch Video of 'Ambarsariya' From Fukrey:

This song will not only bring the ever-refreshing memories of Sushant Singh Rajput back, but will also leave you in awe, seeing its motivating cinematography. The song "Manja", from the film Kai Po Che, features Rajkummar Rao and Amit Sadh.

We have saved the best for the last! Well, the ever-romantic (on-screen) chemistry of Salman Khan and Aishwarya Rai in this song is what will mesmerise you. Not to discount the superb lyrics by Mehboob, and voices of Shankar Mahadevan, Damyanti Bardai, KK, Jyotsna, this song from the film Hum Dil De Chuke Sanam should surely be on the top of your playlist.

Makar Sankranti is one of the most favourite festivals for the people of Maharashtra and Gujarat. Popularly known as Maghi, and Sankranthi, the festive occasion marks the end of the winter solstice. As you gear up for Makar Sankranti's festivities, make sure you tune into these popular Bollywood Makar Sankranti songs this year.

(The above story first appeared on LatestLY on Jan 13, 2021 04:24 PM IST. For more news and updates on politics, world, sports, entertainment and lifestyle, log on to our website latestly.com).