Shab-e-Miraj 2021 Date, History and Significance: Know All About 'The Night of Ascent', Also Known as Lailat Al Miraj 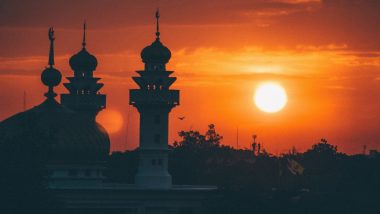 Happy Shab-e-Miraj 2021! The Night of Ascent is here. The auspicious and one of the most celebrated dates of the Islamic calendar is here. The holy night, also known as Lailat al Miraj and Isra and Miraj, Shab-e-Miraj holds special significance in the Muslim community. It is said that the holy night that comes on the 27th day of the month of Rajab, the seventh month of the Islamic calendar. The event is observed by Muslims across the world ahead of the holy month of Ramzan or Ramadan. We will give you more detail about the date, history and significance of this holy night. Shab-e-Barat: Significance And Other Key Facts About Holy Night Ahead of Ramadan Month.

As mentioned above, Shab-e-Miraj is observed on the 27th day of the month of Rajab. Therefore, in India, 27th Rajab will be on March 12 and Shab-e-Miraj will be observed on the same day. However, in Saudi Arabia and other countries in the middle east, the occasion will be marked on March 11. The date depends upon the sighting of the moon in a respective region. To celebrate Shab e Miraj celebration via social media platforms like Facebook, Instagram, WhatsApp, etc. You can download out Shab-e-Miraj messages, Islamic quotes, wallpapers, greetings and WhatsApp status from below which is absolutely free.

History and Significance of Shab-e-Miraj:

At the mosque, prophet Mohammad is said to have led the other prophets in prayer. He then ascended to heaven where he spoke to Allah. His subsequent ascent into the heavens came to be known as the Miraj. During this meeting, five-time namaz daily was made mandatory for Muslims.

(The above story first appeared on LatestLY on Mar 10, 2021 07:32 PM IST. For more news and updates on politics, world, sports, entertainment and lifestyle, log on to our website latestly.com).