Shirdi Sai Mahasamadhi Day 2020 Date and Significance: Know About The Auspicious Day on Which Shri Sai Baba Left His Soul

Sai Baba took a Samadhi on October 15, 1918. This marks the auspicious observance of Sai Mahasamadhi Day, which is being celebrated today. On this day, a lot of devotees visit the Shirdi temple of Sai Baba and pay respects to him. On this significant day, we tell you more details about this observance. 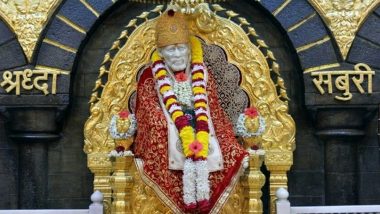 Sai Baba of Shirdi was an Indian spiritual master who is believed to be a manifestation of Shri Datta Guru. And while little is known about his birth, real name and background, Sai Baba took a Samadhi on October 15, 1918. His birthplace even sparked a debate at the early start of the year. This marks the auspicious observance of Sai Mahasamadhi Day, which is being celebrated today. On this day, a lot of devotees visit the Shirdi temple of Sai Baba and pay respects to him. A lot of cultural programmes are also held. But because of the pandemic this time, the Shirdi Sai Baba temple is closed. On this significant day, we tell you more details about this observance.

Sai Baba gave teachings of moral code of forgiveness, charity, helping other, inner peace and devotion. He also condemned distinction on the basis of caste and religion. His teachings combined Hinduism and Islam and he gave an important message of "Sabka Maalik Ek" (Everyone's Master is One). His simple living and such virtues attracted everyone towards his worship. It is said that Sai Baba left his soul behind willingly. October 15 was the last day for his physical body. Shirdi Sai Baba Mahasamadhi 2020 HD Images and Wallpapers for Free Download Online: WhatsApp Stickers, Facebook Messages and Greetings to Send on His Punyatithi.

Sai Baba during his last days used to listen to religious and sacred stories. He was becoming weaker everyday but no devotees were allowed to go near him. His disciples guarded his body for three days. He took a Samadhi on October 15, 1918 when he predicted he would pass away soon. He was tired on people worshiping him for material gains and the constant debate about his religion. He always believed in one God. It was the day of Dusshera, he decided to cross the 'border.' He went bare and announced the day of the end of his physical body. His remains were interred at "Buti Wada" in Shirdi. It is the same place where  Shree Samadhi Mandir or Shirdi Sai Baba Temple has been constructed. Thousands of devotees throng this place on this day and worship the Shri Sai Baba.

(The above story first appeared on LatestLY on Oct 15, 2020 01:21 PM IST. For more news and updates on politics, world, sports, entertainment and lifestyle, log on to our website latestly.com).