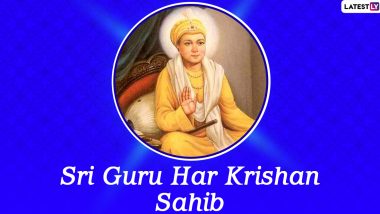 He became Guru at the age of 5. He succeeded Guru Har Rai on October 20, 1661. The eighth guru is also known as Bal Guru. Guru Har Rai supported the moderate Sufi influenced Dara Shikoh instead of conservative Sunni influenced Aurangzeb as the next Mughal emperor. However, Aurangzeb won the succession war in 1658 and became the emperor of Delhi.

He wanted Guru Har Rai's elder son Ram Rai to be the next Sikh Guru. Aurangzeb called the seventh guru to his court, but Guru Har Rai instead of going himself, he sent his elder son Ram Rai. Aurangzeb kept the 13-year-old Ram Rai as a hostage. He also questioned Ram Rai about a verse in the Adi Granth – the holy text of Sikhs. Sri Guru Har Krishan Sahib Parkash Utsav 2019: Remembering Eighth Guru of Sikhs on 363th Jayanti.

Aurangzeb claimed that it disparaged the Muslims. Ram Rai changed the verse to appease Aurangzeb instead of standing by the Sikh scripture, an act for which Guru Har Rai excommunicated his elder son, and nominated the younger Har Krishan to succeed as the next Guru of Sikhism.

Before his death, the seventh Guru, cautioned Guru Har Krishan not to meet Aurangzeb. However, after Guru Har Rai's death, Aurangzeb sent Raja Jai Singh of Amber to invited Guru Har Krishan to appear in the Mughal court. He agreed to Auranzeb's invitation and moved towards Delhi. After arriving in Delhi, Guru Har Krishan contracted smallpox, and his meeting with Aurangzeb was cancelled. Guru Tegh Bahadur ji Parkash Purab 2020: Remembering Ninth Guru of Sikhs Also Known as 'Hind Di Chadar' on His 400th Parkash Utsav.

Guru Har Krishan died in 1664. Before his death, the eighth guru said, "Baba Bakale". The Sikh religious leaders of that time interpreted that the next Sikh Guru would be in Baka Bakala, a village town in Punjab. This created confusion as many self-appointed successors sprung up on Punjab's small-town Baba Bakala. After few months, Sikh Sangat headed by some prominent Sikhs from Delhi, arrived at village Bakala and acknowledged Sri Guru Tegh Bahadur Ji as the Ninth Guru in August 1664.

(The above story first appeared on LatestLY on Jul 13, 2020 06:45 PM IST. For more news and updates on politics, world, sports, entertainment and lifestyle, log on to our website latestly.com).