Star Wars Day 2020: Date, History And Significance of the Franchise and Why They Say 'May The 4th Be With You!'

The fans of Star Wars all over the globe must be in their highest spirits today as it is 4th of May. 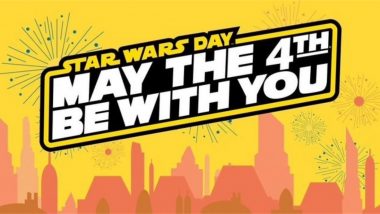 The fans of Star Wars all over the globe must be in their highest spirits today as it is 4th of May. This day is dedicated by the fans to this popular franchise and they call it as 'Star Wars Day.' The day was never officially announced by the makers of the franchise but was instead gifted from fans to fans. Automatically, 4th May is now a day on which the admirers of the flick revive their memories from the films. Starwars Day 2020 Funny Memes & Jokes: May the Fourth Be With You! From Hilarious Posts About Chewbacca to Yoda, Here's What You Don't Want to Miss Today.

The fans started to celebrate this unique day on May 4 because of the catchphrase in the flick that says, 'may the fourth be with you.' It was sort of a pun to the popular catchphrase, 'May the force be with you' and since then has been an eminent part of this world. It all first started when first Woman Prime Minister of UK, Margaret Thatcher became took over her office. As a congratulatory token, her party released an ad in London Evening News writing, "May the Fourth Be With You, Maggie. Congratulations."

What's the importance of the phrase 'May the Force be with you'?

This much-loved catchphrase first was seen in Star Wars: Episode IV A New Hope. It has been a part of the Star Wars universe since then. The catchphrase has been mostly seen uttered when the characters parted ways or were about to face some new problem.

The first celebration was organized at Toronto, Ontario, Canada in 2011. It had costume contest and celebrity judges, which was backed by by Sean Ward and Alice Quinn. Disney and Star Wars theme parks are also an essential part of the celebration with fireworks and costume party in the place. When it comes to social media, the netizens love to relive the moments from the film and flood social media with Star Wars themed posts and memes. One of the most loved characters, 'Yoda' is often the highlight.

(The above story first appeared on LatestLY on May 04, 2020 09:06 AM IST. For more news and updates on politics, world, sports, entertainment and lifestyle, log on to our website latestly.com).