Subho Mahalaya 2021 Date and Time: Know Tithi and Significance of the Day When Pitru Paksha Ends and Devi Paksha Starts the Countdown for Durga Puja

Subho Mahalaya 2021! Durga Puja begins on the day of Mahalaya which holds special significance. The day is majorly celebrated in Bengal for which people wait throughout the year. On Mahalaya Pitru Paksha (Shraddh) ends on one side, as well as Maa Durga comes to earth from Mount Kailash to stay here for the next 10 days. 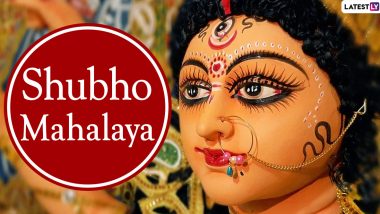 Subho Mahalaya 2021! Durga Puja begins on the day of Mahalaya which holds special significance. The day is majorly celebrated in Bengal for which people wait throughout the year. On Mahalaya Pitru Paksha (Shraddh) ends on one side, as well as Maa Durga comes to earth from Mount Kailash to stay here for the next 10 days. This time Sarva Pitru Amavasya and Mahalaya will be observed on October 6 (Wednesday). The sculptors prepare the eyes of Maa Durga on the day of Mahalaya and it is only after Mahalaya that the idols of Maa Durga are finalized as she adorns the pandals. According to Hindu scriptures, Durga Puja takes place in the Shukla Paksha of the month of Ashwin. This time Durga Puja starts on October 11 and ends with the celebration of Dashami or Dussehra on October 15. Navratri 2021 Colours List in October for PDF Download Online: Which 9 Color Dress To Wear Date-Wise in Sharad Navratri? Get Full Calendar and Significance of the Dress Code.

What and When is Mahalaya?

According to the scriptures, Mahalaya and Sarva Pitru Amavasya will be celebrated on the same day i.e. Wednesday, October 6. On the day of Mahalaya, the sculptor prepares the eyes of Maa Durga.

According to mythological beliefs, Brahma, Vishnu and Mahesh created Maa Durga to kill the tyrannical demon Mahishasura. The demon was blessed with a boon that no god or human would be able to kill him. After receiving such a boon, Mahishasura became the king of the demons and attacked the gods. The gods lost the war and Devlokar was being ruled by Mahishasura. To protect it from Mahishasura, all the gods worshiped Adi Shakti along with Lord Vishnu. During this, a divine light emanated from the bodies of all the deities, which took the form of Goddess Durga. Maa Durga, armed with weapons, killed Mahishasura on the 10th day after fighting a fierce battle for nine days. Actually, Mahalaya signifies the arrival of Maa Durga on earth and she is considered to be the goddess of power.

How is Mahalaya Celebrated?

Although Mahalaya is the main festival celebrated by Bengalis, but it is also celebrated with pomp across the country. People who have faith in Maa Durga wait for this day throughout the year. The beginning of Durga Puja is considered to be from Mahalaya itself. It marks the beginning of Navratri and Durga Puja. It is believed that Goddess Durga was invoked on the day of Mahalaya to destroy the demon named Mahishasura.

Durga Puja 2021  is beginning on October 11 and will continue till Vijayadashami on October 15.

Mahalaya is also the last day of Pitru Paksha aka Sarva Pitru Amavasya. On this day all ancestors are remembered and offered tarpan. It is believed that by doing this the souls of the ancestors are satisfied and they leave happily.

(The above story first appeared on LatestLY on Oct 05, 2021 09:23 AM IST. For more news and updates on politics, world, sports, entertainment and lifestyle, log on to our website latestly.com).