When Is Parsi New Year 2022 in India? Know Date, Traditions, History, Significance and Everything Important About Celebrating Navroz

Parsi New Year or Navroz is celebrated by the Parsi community across the world by following a variety of long-established traditions and practices. The occasion is a regional festival observed on the first day of Farvardin, the first month of the Zoroastrian calendar. 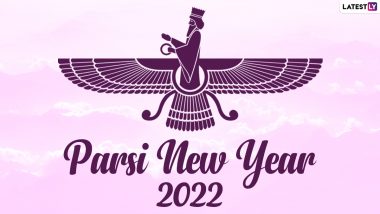 Parsi New Year is celebrated as per the dates in the Shahenshahi calendar, which does not consider leap years. The occasion is also known as Navroz, derived from the Persian words 'Nav' and 'Roz', meaning 'New Day' in English. In India, unlike other regions of the sphere, the Navroz celebration is marked 200 days from its original spring equinox date. The regional holiday marks the commencement of the new year according to the Shahenshahi calendar, followed by the Parsi population living in Gujarat and Maharashtra. Thence,  Parsi New Year 2022 will begin on Tuesday, 16 August. The event is observed in the present by remembering the myths of Jamshed. Let's get to know everything essential about the Parsi event. August 2022 Holidays Calendar With Major Festivals & Events: Raksha Bandhan, Independence Day, Muharram, Ganesh Chaturthi: Check All Important Dates and Indian Bank Holidays for the Month.

The Parsi population follow the most important and ancient religion of Zoroastrianism, which is practised for 1000 years. It was the official religion of Persia that came under the monotheistic faiths. The belief was formed by Prophet Zarathustra in ancient Iran. After the invasion of Islamic armies in Persia, many Zoroastrians migrated to places such as Pakistan and India. In Iran, even the non-Zoroastrian people celebrate the Persian New Year (Parsi in Gujarati) by following the  Fasli/Bastnai calendar, which fixed the first day of the year on the Spring Equinox, i.e. during March. The Parsi New Year or Navroz is originally named after an ancient Sassanian King, Jamshed, who is believed to be founded the Shahenshahi calendar. From Patra ni Macchi to Sali Murghi, Try These Tasty Delicacies to Celebrate Jamshedi Navroz.

The community celebrates the Paris New Year by cooking authentic dishes like pulav, fish, moong dal, sali boti and sweet ravo for the feasts. Families also visit each other's homes to celebrate the new beginnings with zeal and a positive attitude. People decorate their houses before the celebration with flowers and rangoli, offer milk, water, flowers, sandalwood and fruits to the sacred fire and visit the Fire Temple to seek blessings. Upon arrival, guests are greeted with a sprinkle of rose water and handed Faluda to drink. Some folks also mark New Year's day with philanthropic contributions.

(The above story first appeared on LatestLY on Aug 12, 2022 04:30 PM IST. For more news and updates on politics, world, sports, entertainment and lifestyle, log on to our website latestly.com).