Internation Women's Day is just around the corner. The day dedicated to females is recognized by all the countries around the world. In many countries, a national holiday is observed on this day. Although the history of Women's Day takes you back in time, it was sponsored by the United Nations (UN) in the year 1975. 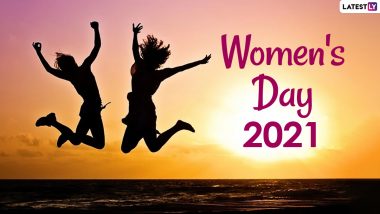 Internation Women's Day is here. The day dedicated to females is recognized by all the countries around the world. In many countries, a national holiday is observed on this day. Although the history of Women's Day takes you back in time, it was sponsored by the United Nations (UN) in the year 1975. Women's Day was celebrated for the first time in the second decade of the 20th century, first on March 19. Later the date was set on March 8 for the advancement of women's rights. Even today, International Women's Day is celebrated on March 8. In this article, we bring you a little more information you must know about the celebration of International Women's Day such as its date, colour, history and significance. Why is purple shade so important? Know everything about the day dedicated to females globally.

Women's Day was duly initiated in the 20th century, but in the mid-19th century on March 8, 1857, some women workers in New York City, USA, demanded a better work situation and better pay. According to the report of Britannica, at that time the police crushed the demonstration with full force, but after many years, those women again put full force and formed an independent women's union. The importance of International Women's Day (IWD) grew rapidly in the 20th century to promote women's rights and end suffrage. As part of its campaign for women's upliftment, the Socialist Party of America organized the first National Women's Day in 1909, encouraged by mass meetings across the US. This sequence lasted for many years.

Why is Purple Shade Important?

The colours of International Women's Day are Purple, green and white. Purple is the most important shade for IWD as it signifies justice and dignity. Green signifies hope, white represents purity, which is a controversial concept. The colours were originated from Women's Social and Political Union (WPSU) in the UK in 1908.

Subsequently, thanks to the vigorous efforts of the famous German activist Clara Zetkin, the International Socialist Congress in 1910 agreed to the International Day of Women's Day and Public Holiday on this day. As a result, on March 19, 1911, the first IWD was held in Austria, Denmark and Germany.

After women gained suffrage in Soviet Russia in 1917, March 8 became a national holiday there. It was then predominantly celebrated by the socialist movement and communist countries until it was adopted by the feminist movement in about 1967. The United Nations began celebrating International Women's Day in 1977. Every year, the day is celebrated worldwide, promoting the achievements of women, historical movements towards equality and stressing on what is to be done next so that women have equal access and rights.

There are different themes designated to the day. The 2021 UN theme for International Women's Day is "Women in leadership: Achieving an equal future in a COVID-19 world." The theme highlights the impact that girls and women worldwide had as health care workers, caregivers, innovators and community organizers during the COVID-19 pandemic.

(The above story first appeared on LatestLY on Mar 08, 2021 08:33 AM IST. For more news and updates on politics, world, sports, entertainment and lifestyle, log on to our website latestly.com).