From Ambur Biryani to Tehari Biryani, 8 Mouth-Watering Biryani Recipes You Must Try at Least Once! Watch Videos

Biryani is one unique and classic dish, that can be tangy or simple. Made with traditional herbs and spices, this meal can never be replaced by any other. We at LatestLY, have curated a list of 8 varieties of Biryani that you just can’t miss to taste at least once 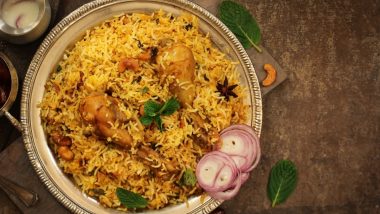 Biryani is one such meal that you just can’t miss in India. Every state has its own variation of Biryani be it vegetarian or non-vegetarian.

Biryani is one unique and classic dish, that can be tangy or simple. Made with traditional herbs and spices, this meal can never be replaced by any other. We at LatestLY, have curated a list of 8 varieties of Biryani that you just can’t miss a tasting at least once. Biryani Recipes Searches Go Up Over Past Few Months Amid COVID-19 Pandemic as People Experiment at Home And Consume the Delicacy

According to the legends, this biryani was created for the vegetarian Hindu bookkeepers at the Mughal court and since then it has become very famous amongst the vegetarians in North India.

Ambur Biryani comes from the Vellore district of Tamil Nadu. For a better flavour, it is generally served with brinjal curry, ennai kathirikai.

This is one of India’s favourite biryanis. It is believed to have been originated from the kitchen of Nizams. The most populated form of Hyderabadi biryani is the Dum biryani in which the meat is marinated and cooked with rice in an earthen pot sealed with dough over a charcoal fire.

Also known as the Mangalorean style biryani, it is a specialty of the beary Muslim community in coastal south Karnataka. The rice and chicken are cooked together and then layered and slowly cooked together.

Being the capital of Mughal Emperors, Delhi has its own flavours of biryani like Nizamuddin Biryani and Shahjahanabadi biryani. The best taste of the biryani can be relished in the old market areas around the mosques.

The spicy Memoni Biryani comes from the Gujarat Sindh region. It uses very less tomatoes and food colouring, allowing the rich colour of the meat and the spices to show.

This form of biryani was originated at the time of Kalyani Nawabs in Bidar. It doesn’t need any expensive ingredients and yet has richness in taste which makes this biryani to be known as the poor man’s Hyderabadi biryani.

It evolved from the Awadhi style when Lucknow’s last Nawab Wajid Ali Shah was exiled to the city in 1856. This is a very unique form of biryani as the rice is flavoured with rose and coloured in the yellow colour of saffron.

Biryani is a rich food known for its aromatic herbs and spices and its variety in taste. To have the best taste of this dish, you must try the above-mentioned super delicious varieties that will keep you drooling.

(The above story first appeared on LatestLY on Jan 29, 2022 11:51 AM IST. For more news and updates on politics, world, sports, entertainment and lifestyle, log on to our website latestly.com).