International Falafel Day 2020: From Origin of Falafel to World’s Largest Falafel, Here Are 7 Interesting Facts About This Middle Eastern Dish

International Falafel Day is celebrated worldwide on June 12 every year. This occasion is observed to bring all falafel lovers together. The purpose of this day celebration is to encourage people to eat falafel who have never eaten it. Falafel is a deep-fried ball made from ground chickpeas. 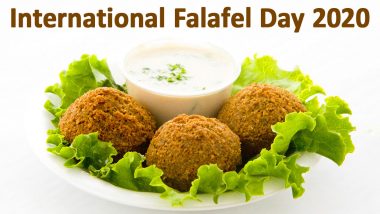 International Falafel Day is celebrated worldwide on June 12 every year. This occasion is observed to bring all falafel lovers together. The purpose of this day is to encourage people to eat falafel. Falafel is a deep-fried ball made from ground chickpeas. It can also be flat or a doughnut-shaped patty. On the occasion of International Falafel Day 2020, LatestLY brings you seven interesting facts about this Middle Eastern dish.

In 2012, Ben Lang, food lover and entrepreneur, created International Falafel Day. Lang is the co-founder of Innovation Israel. Falafel is high in protein, fibre and complex carbohydrates. Chickpeas used in the preparation of this dish are low in fat and contain no cholesterol. Falafel is most commonly served in pita bread with hummus, Iraqi fried eggplant and french fries. As per the data of the United States Department of Agriculture (USDA), 100 g of falafel contains 333 calories.

1. Many Middle Eastern countries have taken credit for creating falafel. However, some ancient Egyptian paintings seem to depict people frying a ball-like food. Therefore, falafel was most probably developed in Egypt.

4. Falafel was also served at McDonald for a certain period in breakfast menu in Egypt with the name 'McFalafel'.

5. In modern times, falafel has been considered the national dish of Egypt, Palestine, and of Israel.

6. Falafel has become popular among vegetarians and vegans, as an alternative to meat-based street foods.

7. During Ramadan, falafel balls are sometimes eaten as part of the iftar, the meal that breaks the daily fast after sunset.

Enjoy International Falafel Day 2020, by trying falafel from a nearby restaurant which serves this dish or simply preparing it by yourself.

(The above story first appeared on LatestLY on Jun 12, 2020 08:02 AM IST. For more news and updates on politics, world, sports, entertainment and lifestyle, log on to our website latestly.com).