National Marshmallow Day 2021 in Australia: Here Are Some Interesting Facts About This Delicious Confectionery

National Marshmallow Day is unofficially observed every year in Australia on May 18. To celebrate the occasion, treat yourself to roasted marshmallows or some hot cocoa with marshmallows. Marshmallow is indeed everyone’s favorite candy. It is a type of confectionery that consists of sugar or corn syrup, water and gelatin. 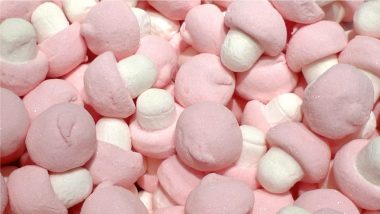 National Marshmallow Day is unofficially observed every year in Australia on May 18. To celebrate the occasion, treat yourself to roasted marshmallows or some hot cocoa with marshmallows. Marshmallow is indeed everyone’s favourite candy. It is a type of confectionery that consists of sugar or corn syrup, water and gelatin. The ingredients are whipped together to a solid but soft consistency and moulded into shapes. The resulting confection is made up of 50% air, which is responsible for its unique texture. On the occasion of National Marshmallow Day 2021, we will share with you some interesting facts about this world's favourite candy. Hot Chocolate Bombs Filled with Marshmallows.

Modern marshmallow confections were first made in France around 1850. This first method of manufacture was expensive and slow because it involved the casting and moulding of each marshmallow. French candy makers used the mallow root sap as a binding agent for the egg whites, corn syrup, and water. The name of the confectionery comes from the name of the plant Althaea Officinalis, commonly known as a marshmallow. The candy was named after the plant because the original recipe called for marshmallow roots. On National Marshmallow Day 2021, you can enjoy this candy with desserts or fruit salads or ice cream or hot chocolate.

2. Marshmallow is considered a year-round snack even though the majority is sold during October and December.

3. Over 50% of marshmallows sold during the summer months are toasted over a fire.

4. The record for most marshmallows eaten in 1 minute is 25 which was achieved by Anthony Falzon (Malta) in Sliema, Malta, on March 25, 2013.

5. Althaiophobia is the fear of marshmallows, mostly caused by the gooey texture.

6. Every 100 grams of marshmallows contain around 318 calories.

7. A whopping 93.10 kg is the weight of the largest marshmallow in the world. Two men from the UK made it.

This confectionery is also handy while baking as filling or decorations. Roasted marshmallows are a popular camping treat in the UK, North America, Australia, and New Zealand. On National MarshmallowDay 2021, you should indeed come up with your own unique way of eating this candy.

(The above story first appeared on LatestLY on May 18, 2021 12:01 PM IST. For more news and updates on politics, world, sports, entertainment and lifestyle, log on to our website latestly.com).