Prithveesh has created more than 200 portraits featuring stalwarts like Deepika Padukone, Neeraj Chopra, and a lot more eminent personalities. A larger than life size’s portrait was made out of Rubik’s cubes to celebrate Puneeth Rajkumar in the year 2019, which was later shared by the actor too on his social media accounts. 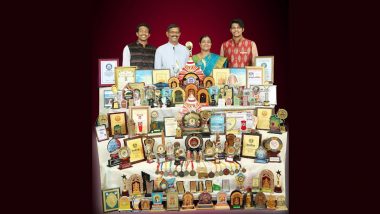 A Hungarian architect, Erno Rubik invented the Rubik's cube in the year 1974 and since then it has been one of the favorite puzzles for parents and children. An average human being or a child takes consistent efforts sometimes for a day, for weeks, or even months to master the cube! And here we have, Prithveesh K Bhat from Karnataka who holds 2 Guinness World Records due to his phenomenal talent for mastering the mind-boggling puzzle! To be precise, the Rubik's cube maestro has been entitled with 2 Guinness World Records, one in 2016 for 'World’s Largest Dual Sided Rubik’s Cube Mosaic' and another one in the year 2019 for World’s 'Most contribution to a Rubik’s cube Mosaic.'

Prithveesh's tryst with the Rubik's cube began in the year 2014. He shares, "It took me around a month just to learn to solve the 3x3x3 Rubik’s cube. I have always been inclined towards mathematics. It was during my engineering days, to be precise, the previous day of my M4 examination when I first met the cube. It intrigued me; I was stunned by the complexity of this creation. From that day onwards, I kept on exploring, kept on researching new ways to use the Rubik's cube, especially in creating mosaic cube arts i.e using thousands of cubes to represent an artwork."

Prithveesh created a dual-sided figure of the popular animated character Mr. Bean and the legendary artist Charlie Chaplin using 4500 Rubik's cubes! Krushna Abhishek also underscored the facts that a representation of 4500 Rubiks cubes surpassed the height of "Qutub Minar and that Prithveesh managed to crack 43 quintillion combinations to bring pride to the country! Prithveesh further added, "If I want to bring even pixel on the top, I need to rotate it considering the fact that the bottom layer shall get affected too! Imagine getting the desired layer for 4500 cubes, that too for the creation of a dual-sided portrait!"

Prithveesh has created more than 200 portraits featuring stalwarts like Deepika Padukone, Neeraj Chopra, and a lot more eminent personalities. A larger than life size’s portrait was made out of Rubik’s cubes to celebrate Puneeth Rajkumar in the year 2019, which was later shared by the actor too on his social media accounts.

Another of Prithveesh’s feat includes creating one of Asia's biggest artwork done using 7400 mini cubes which is permanently installed at the HCCB Hindustan Coca-Cola Beverages headquarters, Bengaluru showcases HCCB's diverse products in it.

He has also featured in Stars Sports RCB Insider Show, Sony Sab, Colors, Star Suvarna and other TV shows for his cube art performances. In the recent feature of Star Sports' RCB Insider Show, Prithveesh, along with his brother Pradheesh K. Bhat celebrated the brotherly-bond between the former Indian skipper Virat Kohli and the ever-amazing AB de Villiers with a whopping number of 700 Rubik's cube. Prithveesh plans on taking his art to another level by acing the creation of mosaic art by using different shapes of puzzles!