Covid-19 was likely far more widespread in Europe, and around the world, before a first official diagnosis was made, claimed a study. The virus was officially announced from an outbreak in the Chinese city of Wuhan in December 2019, but reports claim it to have started in November. 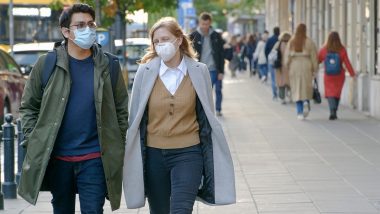 Oslo, January 28: Covid-19 was likely far more widespread in Europe, and around the world, before a first official diagnosis was made, claimed a study. The virus was officially announced from an outbreak in the Chinese city of Wuhan in December 2019, but reports claim it to have started in November. But, the new study published in the Cambridge University Press epidemiology and infection journal claimed the virus was circulating in Norway in November 2019, whereas officially the virus was first detected in France in late January, Euronews reported.

Scientists at Akershus University Hospital near Oslo identified a positive coronavirus result in a blood sample taken from a pregnant woman on December 12, 2019 and said she was probably infected at the end of November or the beginning of December. COVID-19 Origin: Coronavirus Was ‘Highly Adapted’ to Infect Human Cells, Says Study.

"Our findings change the history of the corona epidemic both in Norway and in the world," Anne Eskild, professor and chief physician at Akershus was quoted as saying. "We actually found four out of 1,500 tests on pregnant women that were positive before the first case in France was diagnosed," she told Euronews.

A cluster of pneumonia-like cases was identified in Wuhan, China, during December 2019, and on January 12, 2020 Chinese authorities shared the gene sequence of the new rapidly-spreading novel coronavirus.

According to Eurosurveillance, Europe's journal on infectious disease surveillance, epidemiology, prevention and control, the first three European cases were confirmed in France on January 24, 2020 after showing symptoms just a few days earlier.

In May 2020 it was reported another French patient, treated for pneumonia in hospital on December 27, 2019, tested positive for Covid after a swab taken at the time was analysed.

Eskild noted that her research shows the virus was around long before those French cases. "The catchment area of our hospital includes women who come from all over the world. I think that some of the women who were positive were born or had been in, or had relatives or visitors from places all over the world," she said.

"The conclusion to this is that since the women in our catchment area are from all over the world, the virus may have been all over the world before the Chinese announced the epidemic." As part of pregnancy care in Norway, blood samples are taken from all pregnant women to check for sexually transmitted infections.

Samples are stored anonymously, for the purpose of monitoring potential infectious diseases and so were available to researchers looking into the origins of the spread of Covid-19 in the Nordic nation, the report said.

"There are probably few other countries that have access to stored blood samples at the population level, and therefore there are few or no other retrospective studies," Eskild added.

(The above story first appeared on LatestLY on Jan 28, 2022 07:02 PM IST. For more news and updates on politics, world, sports, entertainment and lifestyle, log on to our website latestly.com).