How to Go to Bed on Time; Late Sleepers Can Advance Sleep Time By 2 Hours With This Trick

The study, published in the journal Sleep Medicine, showed that it was possible to shift the circadian rhythm of 'night owls' using non-pharmacological and practical interventions. 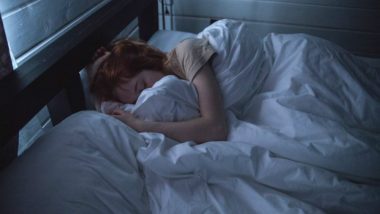 London, June 10: Researchers have found that a simple tweak to the sleeping patterns and maximising outdoor light during the mornings for a period of three weeks can help night owls -- people with extreme late sleeping and waking habits - bring forward their sleep/wake timings by two hours. Poor Sleep Caused Due to Lack of Proper Nutrition, Says New Study.

Such changes can also lead to improved performance in the mornings, better eating habits and a decrease in depression and stress among people with late sleeping habits, showed the findings.

The study, published in the journal Sleep Medicine, showed that it was possible to shift the circadian rhythm of 'night owls' using non-pharmacological and practical interventions.

"Having a late sleep pattern puts you at odds with the standard societal days, which can lead to a range of adverse outcomes - from daytime sleepiness to poorer mental wellbeing," said study co-author Andrew Bagshaw from the University of Birmingham in the UK. The R wanted to see if simple things could solve this issue.

In an experiment with a small group of participants that spanned for three weeks, the group were asked to wake up two-three hours before regular wake up time and maximise outdoor light during the mornings. Night-Time Screen Use May Lead to Poor Sleep in Kids: Study.

They were also asked to go to bed two-three hours before habitual bedtime and limit light exposure in the evening, have fixed sleep/wake times on both work days and free days and have breakfast as soon as possible after waking up, eat lunch at the same time each day, and refrain from eating dinner after 7 p.m.

"We wanted to see if there were simple things people could do at home to solve this issue. This was successful, on average allowing people to get to sleep and wake up around two hours earlier than they were before," Bagshaw said. Women Sleep Better in Company of Dogs Than Cats or Humans, Finds New Study.

"Most interestingly, this was also associated with improvements in mental wellbeing and perceived sleepiness, meaning that it was a very positive outcome for the participants."

(The above story first appeared on LatestLY on Jun 10, 2019 04:56 PM IST. For more news and updates on politics, world, sports, entertainment and lifestyle, log on to our website latestly.com).