Despite its progressive tag, Kerala is not free of misogyny. 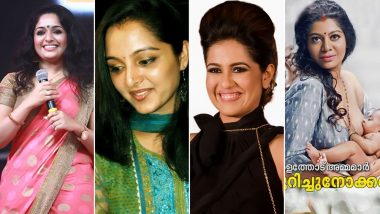 In the last couple of years, Kerala has been pulling out all stops to live up to its progressive tag, giving all the other states the proverbial “goals” to live by. The state leads on key health indices. Lauded by the UN for its high human development index, and reputed for its status as India’s first digital state, Kerala looks every bit a modern state it’s trying to be. The state also sets a stellar example for the others by pioneering some of the most ground-breaking steps, favouring the transgender community. It is the first state in the country to have a transgender policy. In the city of Kochi, transgender people have their own school. The Kochi Metro Project was also in the news last year for employing 60 people belonging to the transgender community. The government is also in the midst of opening transgender clinics in all government-run hospitals.

This is probably why the comments made by Professor Rajit Kumar, a lecturer in botany (really?), comes as a rude shock to all of us. He recently implied that women who wear jeans bear transgender children. His Wikipedia page describes him as a controversial Indian teacher and activist, known for misogynistic and narrow-minded views that he tries to push off as scientific. One of his recent gems include: “A woman who dresses up like a man, what will be the trait of a child she gives birth to? The name of such children is ‘transgender’ or ‘napumsakam.’ Today there six lakh such children in Kerala today.” He further went on to say that rebellious men and women beget children who suffer from cerebral palsy and autism.

It’s easy to expect these comments from a boorish politician, a cleric or a vapid actor, but not from a professor of science from arguably the most liberal state in India. But despite Kerala’s reputation as a progressive state with 100 percent literacy, it is still not free from the bane of misogyny. Here are some of the shocking misogynistic events that have emerged from ‘God’s own country’ in the recent years.

Another professor who did serious disservice to his profession was Jauhar Munnavir, from Kerala’s reputed Farook Training College. In a bizarre rant, he went after Muslim women from Kerala whom he accused of not wearing the hijab properly. Comparing women’s bosom to cut watermelon, he blamed women for not covering the chest the way it ought to be. “A woman’s bosom is one of the body parts that attracts a man. That’s why, it should be covered. But women expose some parts of their chest. Like how we cut a small portion of the melon to see whether it is ripe, they expose a part of their chest to show us,” he said. The backlash that followed was comparable to that of the Pink Chaddi campaign seen in 2009, with women demonstrating with sliced watermelon to protest against his comments.

2 Misogynistic Cleric Who Opposed Women Stepping Out of the House

Close on the heels of ‘Watermelongate,’ a cleric AP Aboobacker Musaliyar from Kerala shocked those who were gathered to listen to him with his bizarre justification for denying freedom to women. Speaking at a public event, the cleric says that unlike men, women are prohibited from coming out in public places in Islam because it can result in violence and destruction. As per his logic, the mere sight of women in public places can work men into a sexual frenzy. “There are many reasons for it. Those who oppose or support it know the reasons. It causes destruction and violence. That’s why women are expected to follow the purdah and prohibited from stepping outside in Islam, “he says.

In the wake of the actress-abduction case, Kerala MLA PC George known for his controversial statements crossed all boundaries of propriety when he accused the actress, who was in the centre of an abduction-molestation case, of lying. When the rest of the country was extending solidarity with the victim of the crime, George launched an offensive against the actress saying that stories of her assault was made up since she turned up to work the next day. “If her injuries were as grievous as Nirbhaya’s, how could she go to work the next day?” he argued.

Grihalakshmi, a Malayalam magazine belonging to the Mathrubhumi publishing group had its intentions questioned when a breastfeeding woman was featured on its cover. When poet Gilu Joseph posed feeding a child on the cover of the widely-read magazine, it was inevitable that it wouldn’t go down well with a wide section of the Malayali readership. However, the real surprise was when an advocate named Vinod Mathew filed a case against the magazine, complaining that the picture was “lascivious in nature” and “tends to degrade the dignity of womanhood.” What’s laughable about the whole fiasco is that Mathew, a man, felt entitled to decide what degrades the dignity of womanhood.

Professor Rajit Kumar may find an ally in legendary singer Yeshudas, who not long ago raised eyebrows with his thoughts on jeans-wearing women. Speaking to a crowd, the singer says, “Women shouldn’t trouble others by wearing jeans.” Immediately after he says these words, the crowd breaks into a thunderous applause in agreement. “What has to be covered, should be covered. Women should not try to become like men but behave modestly,” he added. Many feminists like Brinda Karat and activist K Ajitha took umbrage to his comments and said that such comments from an influential person like himself was deplorable.

6 The Attack against Parvathy and Women in Cinema Collective

Following actress Parvathy’s remarks against a misogynistic scene in a Mammootty starrer, fans of the Malayalam superstar harassed the actress online by sending her rape threats. The online trolls also launched an attack against the Facebook page of the Women in Cinema Collective, an organisation that safeguards the rights of women in cinema, downvoting it by the droves. Their only offence was supporting Parvathy when she decided to speak out against the movie. Some of the comments on the WCC’s Facebook page were also from educated men whose diatribe against women made one wonder whether education served any purpose at all.

7 The Attacks against Manju Warrier and Kavya Madhavan

When actor Dileep and his wife former actress Manju Warrier announced the news of their separation and divorce, Keralites were shocked. They were also stunned by their daughter’s decision to stay with her father than her mother. This was enough for the vanguards of Malayali culture to find fault with Manju, accusing her of being a selfish “career-minded” woman and a bad mother who destroyed her own marriage. Later when news about Dileep’s closeness with another actress Kavya Madhavan (whom he eventually married) spread, the blame shifted from Manju to Kavya. Dileep’s new love interest was slut-shamed and harangued for breaking up his family, and his former wife was now exalted. Surprisingly, amidst all this fiasco, Dileep was never once blamed for anything, considering he was the one who violated the sanctity of marriage.

Ranjini Haridas became a household name after she hosted the Malayalam reality show Idea Star Singer. Unlike her predecessors on Malayalam television, Ranjini spoke with a posh-accented Malayalam and spoke English fluently, a fact that didn’t go down too well with the Malayali viewers. She became an object of both wonder and derision for the average Mallu who loved to hate her and was subjected to countless jokes and parodies over the years. But some years ago, Comedian Jagathy Sreekumar, a publically insulted her at a stage show, mocking her accent and her bold demeanour. Not surprisingly, most Malayalis still defend the comedian, saying that Ranjini deserved it. Her only crime was that she is comfortable in her own skin and doesn’t play to the gallery by acting demure.

These incidents just scratch the surface of the countless cases of misogyny existing among the Malayali populace. Kerala has produced some of the most amazing intellectual minds and is a model state as far as development is concerned. But these incidents remind us that education doesn’t dispel prejudice. Much like its mythical matriarchy that Malayalis love to harp about, its 100 percent literacy serves as a veil to mask its inherent misogyny.

(The above story first appeared on LatestLY on Apr 05, 2018 05:11 PM IST. For more news and updates on politics, world, sports, entertainment and lifestyle, log on to our website latestly.com).