National Beer Day was first celebrated in 2009 by Justin Smith of Richmond Virginia. Beer is one such alcoholic drink that if taken in moderation gives you amazing health benefits. 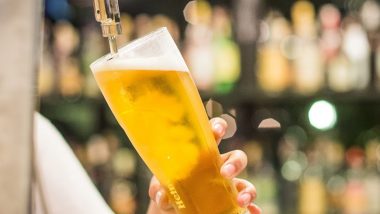 National Beer Day is celebrated every year in the United States as the day when Cullen Harrison Act was enacted after having been signed into law by President Franklin D Roosevelt on March 22, 1933. It is observed every year on April 7. Happy National Beer Day 2022: Quotes and Messages that You Can Send to Your Fellow Beer Enthusiasts!

National Beer Day was first celebrated in 2009 by Justin Smith of Richmond Virginia. Beer is one such alcoholic drink that if taken in moderation gives you amazing health benefits. As you celebrate National Beer Day 2022, we at LatestLY, have curated a few benefits that you can reap from this cool drink.

Beer Has a Lot of o’ B Vitamins

Unfiltered or lightly filtered beer is quite nutritious. Beer has high levels of B vitamins and folic acid which are believed to prevent heart attacks. It also boosts the magnesium and potassium levels in the body.

A regular bottle of beer contains 20 percent of recommended regular dosage of fiber which is extremely beneficial for better bowel movement.

Beer Reduces the Risk of Cancer

Along with health benefits, beer also has positive effects on hair and skin. Overall if taken in moderation beer can works wonders on you.

(Disclaimer: This article does not promote drinking beer and the above pointers are collated from various research and studies in the process.)

(The above story first appeared on LatestLY on Apr 07, 2022 10:24 PM IST. For more news and updates on politics, world, sports, entertainment and lifestyle, log on to our website latestly.com).