Pregnant and Perfect at 37, Zumba Ambassador Sucheta Pal is Busting Myths, Breaking Stereotypes And Setting Pregnancy Goals For Mommies to be

Sucheta Pal, India's Zumba ambassador and lead Zumba Education Specialist, is breaking myths and stereotypes, one event at a time. Five months pregnant and in her second trimester, Sucheta Pal, 37, has ventured out on a seven-city Zumba tour. With her #PregnantAndPerfect campaign, she aims to break some of the biggest myths about pregnancy. 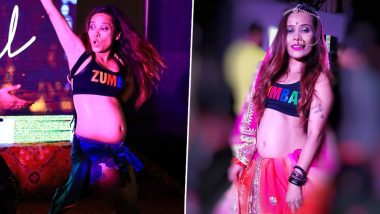 Should you be travelling when you're pregnant? Should you be working out when you're pregnant? And, by working out, we mean not just pre-natal yoga, but also stuff like strength exercises and Zumba? Most women may have doubts when it comes to answering these questions about pregnancy. But, Sucheta Pal, India's Zumba ambassador and lead Zumba Education Specialist, is breaking all these myths, one event at a time. Five months pregnant and in her second trimester, Sucheta Pal has ventured out on a seven-city Zumba tour. With her #PregnantAndPerfect campaign, she aims to break some of the biggest myths about pregnancy. Pregnancy Workout: Safe Exercise and Fitness Tips For Pregnant Women.

When we decided to attend one of her events, at La La Land Brew Pub in Gurugram, we didn't know what kind of energy should we be expecting from her, considering she is five months pregnant and now has a baby bump. We couldn't believe when we saw Sucheta Pal rule the stage, like she always does, with her Zumba moves and blazing energy. Popularly called the 'Zumba mommy' in the Zumba community, Sucheta Pal is on a mission to break stereotypes related to a pregnant woman.

Watch: Pregnant Sucheta Pal Rocks The Stage At Her Event in Gurugram

Sucheta, through her Instagram videos and Zumba events, is out to educate people about everything that pregnancy brings with it, whether good or bad. It is said that women beyond the age of 35 find it difficult to get pregnant or handle pregnancy. At 37, Sucheta Pal is pregnant and "perfect". How, you ask her. Sucheta says that her biological age is 32 because she has been following a healthy lifestyle with a mix of workout and good food for years.

But she has clarified that women who have not been working out before pregnancy shouldn't just abruptly start working out during pregnancy. She also stresses the importance of having a good gynaecologist and being in constant touch with them during their pregnancy. Pregnancy Tips: Here Are Dietician-Recommended Healthy Foods Mothers-to-Be Must Add in Their Diet.

However, in one of her Instagram videos, she did admit that she had a giddy first trimester with mood swings, weird food habits. However, she says that her second trimester has so far been as smooth as "malaai".

Sucheta has covered three cities in her seven-city pregnancy Zumba tour so far and has managed to set an example and become an inspiration for several women with every event. She performs Zumba with the same vigour that she had for years. But what has added more sparkle to her recent events is the grace and energy with which she flaunts her now prominent baby bump and enjoys being pregnant.

While Sucheta is setting pregnancy goals and has become an inspiration for women on how to handle pregnancy, another important secret of her being "pregnant and perfect" is her husband Vivek. As much as the Zumba community loves and is inspired by Sucheta, they are now also in awe of Vivek. They see him not just accompanying Sucheta to every city during her tour, but also managing her events, dancing on the stage with her, supporting her all through. Sucheta, in one of her social media posts, calls him the "wind beneath her wings".

This man is who I call "My Home"!💪💋❤️ Cannot start my #PregnantAndPerfect #IndiaTour without mentioning the role this man plays in my life🙏 . What makes this man truly a MAN? . 💪Zero insecurities (Stands besides his woman like a rock while maintaining his own identity) . 👍Courage to show his vulnerabilities (Only a true man can do this part!) . 🔥As strong as a man should be ( both physically and equal parts emotionally) . 🙏Believes in being a human first ( The reason why I respect and love him ) . So now you know why I fly the way I do? He is the wind beneath my wings you see💃 ( I wish all my women that " you find your home") . . #theman #partnersforlife #soulmates #suchetavivek

As Sucheta continues to set pregnancy goals with this stage not being a hurdle, but another stepping stone in her career, she also adds that she respects women who choose not to work post pregnancy. "At the end, it is all about a human being's choice, it's about what they want to do, and they shouldn't be judged for it," Sucheta says. She also says that the inspiration to keep Zumba going during pregnancy comes from Zumba instructors around the country, who have managed to conduct sessions till their ninth month.

(The above story first appeared on LatestLY on Sep 03, 2019 12:33 PM IST. For more news and updates on politics, world, sports, entertainment and lifestyle, log on to our website latestly.com).