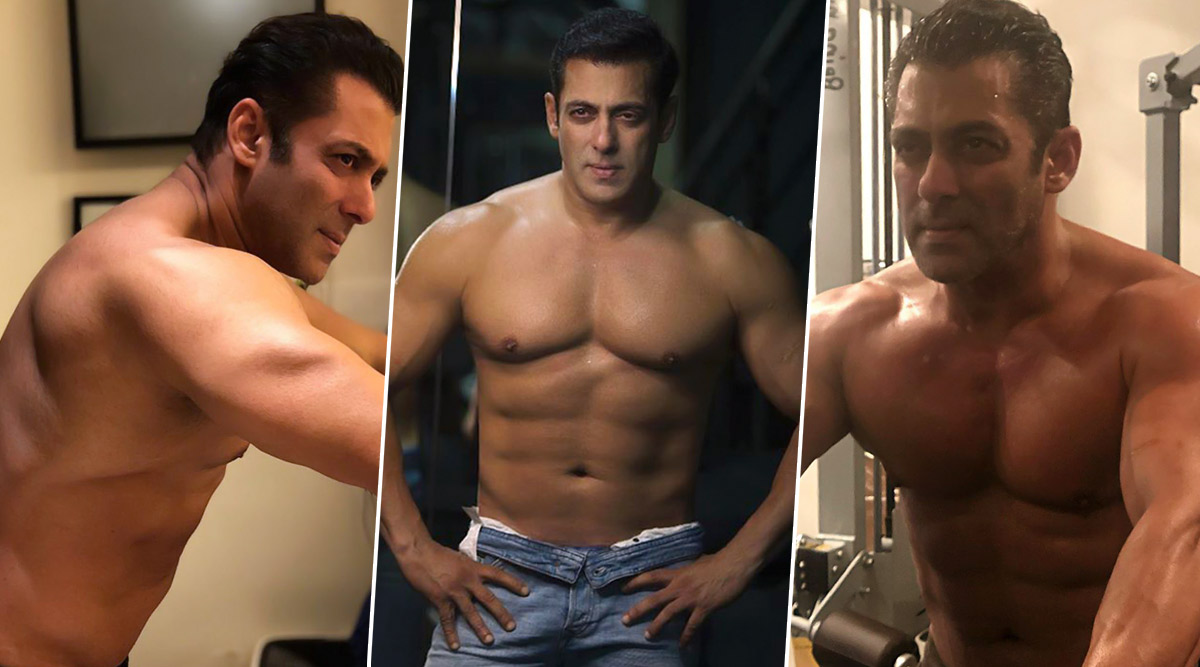 Bollywood actor Salman Khan turns 54 years old on December 27, 2019. He is lovingly called 'Bhaijaan' by his fans. Salman has indeed been the Sultan of the Indian film industry since his debut. People love to see him go shirtless on the screen and there has hardly been any movie where Salman Khan hasn't obliged fans with this. Even in his fifties, his style, charisma and enigmatic personality can give a tough competition to younger Bollywood actors. On the occasion of Salman Khan's birthday, let us explore the fitness secret of Dabangg 3's Chulbul Pandey's muscular physique. Dabangg 3: Ram Charan, Salman Khan, Venkatesh Daggubati Dance to Munna Badnaam Hua and Set the Stage on Fire (Watch Video)

Abdul Rashid Salim Salman Khan is the full name of the most renowned Bollywood actor. He is the eldest son of famous screenwriter Salim Khan. Salman Khan's first movie was Biwi Ho To Aisi, which released in the year 1988. However, he became the heartthrob of the nation from Maine Pyar Kiya, which released a year later. He inspired millions of Indians to have a muscular body after he went shirtless in his famous song, 'Oh Oh Jaane Jaana' from the movie Pyar Kiya to Darna Kya. Salman Khan’s Film Dabangg 3 Trimmed On Day 2 By 9 Minutes and 40 Seconds.

Salman Khan never misses out on his workout session. The Prem of Bollywood works out at least for an hour or two every day in spite of his busy schedule. He usually hits the gym at midnight. The 54-year-old actor concentrates on training his chest, bicep, tricep, back and core muscles. He dedicates three days each to weight training and cardio exercises respectively. Salman gives his body rest on Sundays. The Bigg Boss host loves cycling and can sometimes be seen going to his shooting sets on cycle. The Tiger of Bollywood has recently launched his fitness equipment with the name Being Strong.

Hats Off to Salman Khan's Flexibility

It’s not only about being strong but being flexible too . . Being strong equipment now installed in over 100 gyms in last 2 months @beingstrongindia @jeraifitnessindia

Salman Khan follows a protein-rich diet. In the morning meal, the Dabangg 3 actor eats four egg whites along with low-fat milk. For lunch, the actor has five chapattis along with grilled vegetables and salad. For mid-meal snacks, Salman loves to eat protein bars. For dinner, the Bharat actor avoids carbs and has two egg whites along with a fish or chicken and soup. Salman also takes protein shakes at regular intervals and post his workout, he eats oats topped with healthy nuts.

Salman Khan completely avoids processed food. The Bajrangi Bhaijaan actor believes that more than the gym, a good body is achieved by a strong mentality, will power and most importantly a disciplined lifestyle. Salman is training hard these days for his upcoming movie Radhe, which is the sequel to his famous blockbuster Wanted, and is scheduled to release on Eid 2020. Here's wishing Bollywood's Bhaijaan a very Happy and Healthy Birthday!