Screen Time: Obesity, Low-Self Esteem and Other Side Effects of Screen Exposure in Children Parents Didn’t Know Of 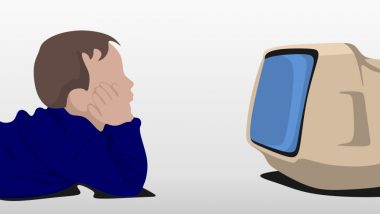 How much screen time is safe? (Photo Credits: Pixabay)

Most parents are concerned about their children’s pastimes these days. Instead of spending time on the playground, modern day children are content sitting on a chair for hours, scrolling through the cell phone screen. Child psychologists and paediatricians are already sounding the alarm bells, warning parents against the possible repercussions of too much screen time. Now, the National Institutes of Health will be helming a landmark study that will enrol 11,000 children, across ten years to understand the effects of screen time on kids.

According to a 60 Minutes report, the NIH researchers will spend a total of $300 million to track the kids for a decade. They are currently studying 9-10-year-olds and scanning their brains to understand the extent of the long-term effects of screen time. There’s already a fair amount of research on the topic, and their findings are grave.

Screen time results in what researchers call “screen-based sedentary behaviour” characterised by low energy expenditure. They develop addiction towards screen-based devices like laptops, mobile phones, computers, tablets and video games on a daily basis. Here’s how much it can impact the young ones. Apple's 'Screen Time' Restrictions Go Weak Against Smarter Kids.

One of the well-documented effects of excessive screen time in children is obesity. Many observational studies have linked screen media exposure to increased obesity risks in children. Screen time often happens at the expense of physical activities like playing outdoor games. Children also tend to binge eat mindlessly while they are watching videos online. Studies also say that screen time alters kids’ food preferences since they are exposed to ads of high-calorie, low nutrient foods.

Excessive screen time in children is tied to a host of diseases, which includes insulin resistance and cardio-metabolic diseases. A study published in the BMJ was able to link screen-based sedentary behaviour to adiposity (increased body fat) and insulin resistance. It concludes by saying that reducing screen time could help in preventing type 2 diabetes in children.

Ophthalmologists and paediatricians have been warning parents against letting children use mobile phones and computers. They have reported a spike in cases of children suffering from dry eyes and eye strain. Staying glued to the screen without blinking has been causing eye disorders in children.

Studies have tied increased screen time to poor self-esteem, which can lead to more mental health problems. Children spending more time online may be exposed to unrealistic body and lifestyle standards. Social media sites like Instagram and Twitter have already been linked to poor mental health.

Also, the more time the child spends on gadgets, the lesser he or she interacts with family or friends. It causes isolation and poor inter-personal relationship with family and friends.

Reducing screen time in children is important because it is addictive, and overexposure increases the chance of overuse in their later life. Healthy habits should be established at a younger age and problematic ones should be nipped at the bud.

Parents should know that minimising screen time will leave kids with more time for face-to-face interactions. According to experts, that’s the best way for children to learn.

When children are watching educational, age-appropriate content, parents can join them and keep them engaged, making screen time a positive experience for both. Studies say that this can help build language and cognitive skills, such as attention, memory and thinking. Shared-screen time can also reduce its negative effects.

(The above story first appeared on LatestLY on Dec 11, 2018 06:41 PM IST. For more news and updates on politics, world, sports, entertainment and lifestyle, log on to our website latestly.com).