Why Are Indian Women More Vulnerable to HIV/AIDS Than Men?

Although historically, more men have AIDS than women, the latter suffers from heightened vulnerability due to biological and socio-economic reasons. 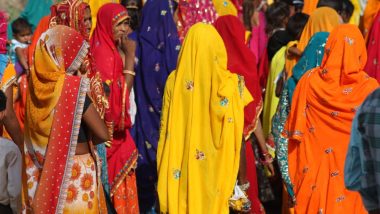 Why women in India are more vulnerable to HIV AIDS? (Photo Credits: Pixabay)

According to National AIDS Control Organisation (NACO), HIV cases have declined by more than 60 percent since 2000. But the pace at which the country is progressing, to meet its 2020 targets, leaves a lot to be desired. One of the disconcerting things revealed by NACO is that two-fifths of the 21.40 lakh people living with AIDS in India happen to be women. Although historically, more men have AIDS than women, the latter suffers from heightened vulnerability due to biological and socio-economic reasons.

According to NACO, a disproportionate amount of women in India are infected by the virus despite more than 90 percent of them being in monogamous relationships. Many of them also end up paying the price for their husbands’ sexual recklessness. Here’s looking at some of the reasons why women in India are more vulnerable to HIV AIDS.

Women are biologically more prone to HIV infection than men when it comes to unprotected sex with an infected partner. According to studies, the male-to-female transmission is two to four times higher than female-to-male. The reason is the female anatomy, which is more vulnerable to infection. According to the National Institute of Health, the tissues of the vagina are fragile and can tear slightly during sex, facilitating the entry of the virus. This is true especially in women under the age of 18. Also, the vagina has a larger surface area, increasing the risk of infection. Women are also at higher risk through anal sex than by vaginal sex. HIV AIDS Act 2017: Everything You Need Know About The Provisions of This Groundbreaking Act.

A sizeable female population of the country are economically dependent on their men for subsistence. Financial dependence on men leaves them with little or no negotiating power in the relationship. They may often have to submit to their partner’s sexual demands and even when their men refuse to don prophylactics during sex. The lack of financial support leaves them at a disadvantage since they can neither negotiate for sexual safety nor buy contraceptives themselves. The economic disadvantage also stops them from seeking treatment for health problems arising from sexually transmitted disease. The Historic Judgment of Decriminalisation of Section 377 Gives a Rest to This Myth!

Most women in the country are married off at a young age, despite the Child Marriage Restraint Act of 1978 that pegs the marriageable age for women at 18. Early marriage makes women more vulnerable to HIV/AIDS since they are not mature enough to make healthy sexual and reproductive decisions. It also exposes them to unprotected sex within marriage and reckless sexual behaviour of their husbands. Women are also not expected to have “sexual knowledge” before marriage. According to a 2005 UNICEF report, women are often the first to be detected with the infection during pregnancy. They are then blamed for the infection even if they got it through their partners.

Poor access to education in India plays a significant role in increasing female vulnerability to HIV/AIDS. Awareness and knowledge are essential tools in combating the HIV/AIDS epidemic. Women belonging to communities that live in poverty are therefore more susceptible to the infections since they are denied education.

Women are also exposed to more sexual violence in India according to NACO reports. They are subjected to rape, incest and sexual coercion, which makes them a vulnerable demographic. Younger women are subjected to sexual violence from infected men due to the prevalent myth that men can be cured of their infection if they had sex with a virgin. Often, married women are not aware of their partners’ sexual exploits before or after marriage. Even if they do, they are forced to stay in the relationship and submit to their husbands’ sexual demands due to either the fear of violence or financial dependence.

As a demographic, women are a vulnerable lot because their contribution to the society is undervalued. Already at a disadvantage biologically, women are treated as sex objects and mere vessels for reproduction. And without enough financial power or education, women unwittingly become victims of life-threatening STDs like HIV/AIDS often for no fault of theirs.

Global and local evidence suggests that women’s vulnerability to HIV/AIDS infection has a trickle-down effect, adversely affecting lives and livelihoods. The only antidote to women’s increased vulnerability is to empower them with both employment and education.

(The above story first appeared on LatestLY on Sep 19, 2018 01:04 PM IST. For more news and updates on politics, world, sports, entertainment and lifestyle, log on to our website latestly.com).