Joe Avianne, The Artist, The Innovator, The Brand

By 1999, Joe decided to join his brother Izzy's jewelry company Avianne and Co. The Aranbayev family has been a part of the jewelry industry for about four generations now. Their father Boris Aranbayev used to work at a jewelry store running wholesale in the early ‘90s. 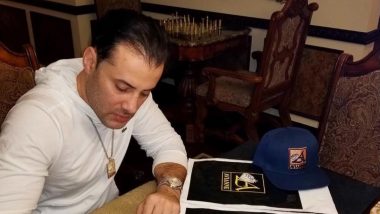 If you are into the whole Jewelry industry, then you definitely have heard about Yosef Aranbayev, or better known as Joe Avianne, CEO of the famous high end jewelry store, Avianne and Co Jewelers, alongside his brother Izzy Aranbayev. Life for Joe wasn't always this glamorous and luxurious. Joe Avianne immigrated from Uzbekistan, Russia to Starrett City, Brooklyn in 1985 along with his family and other relatives. Before Joe joined the family business and became the jeweler superstar he is today, he first was a professional judo fighter. He used to get into a lot of trouble back in his youth, which is why he joined the judo club in order to distract himself from unnecessary situations. With his outstanding skills in the sport, the Olympic team even invited him to train in their facility. Although he didn't pursue Judo, he went on to pursue the jewelry business instead.

By 1999, Joe decided to join his brother Izzy's jewelry company Avianne and Co. The Aranbayev family has been a part of the jewelry industry for about four generations now. Their father Boris Aranbayev used to work at a jewelry store running wholesale in the early ‘90s. Joe and his brother opened their own jewelry store in Manhattan's Diamond District. They chose the name Avianne because it sounded more luxurious and catchy. Joe worked hard in order to establish a name in the jewelry industry.

Before Avianne and Co became huge, Joe had to wander the streets every day to promote their business. He was able to apply his previous work experience as a door-to-door salesman, and a car dealer for Mitsubishi to connect with the clients, and market their business effectively. He would fly around cities nonstop to introduce his million-dollar worth of jewelry to new clients and even managed to gain the loyalty of high-profile customers which helped boost the business. From wealthy businessmen to famous rap/hip-hop superstars. A lot of those flashy sparkling diamond necklaces, watches, and rings, of your favorite celebrities like Travis Scott, Migos, Lil Wayne, Justin Bieber, Nicki Minaj, and so on, were created by Joe Avianne. This helped him build a good reputation in the industry, which opened more doors to even more connections. This is the reason why he got to build not just a name for Avianne and Co., but also a name for himself. He has even created quite a number of followers on social media with 107k followers on his Instagram account.

That doesn't stop there. Joe even had the opportunity to assist movie star Adam Sandler in making the Netflix hit movie, Uncut Gems, directed by the Safdie brothers. Joe taught them everything they needed to learn in order to make the movie run naturally. From teaching them how to properly examine a diamond, to teaching them about the insides and outsides of diamond trades.

Even with all the success happening, Joe isn't anywhere near stopping. Joe has managed to make an impact on the jewelry industry today. With his unique passion and vision, he would most likely gain even more success in the industry. From being a struggling immigrant to being a millionaire, there is no denying that Joe Avianne has definitely paved his own way to success.