Khushi has studied till Class 7 and believes she needs to take 'diksha' now. 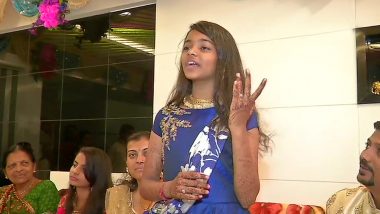 Khushi Shah, a 12-year-old from Surat in Gujarat has decided to live the rest of her life as a saint. While most children of her age are thinking of the profession they want to choose as adults, Khushi prefers to live a simple life. Khushi will take 'diksha' today in Surat where she lives with my family. Yesterday, a celebration was held in the city following which on Wednesday, Khushi will take 'diksha' to become a Jain monk. Khushi has studied till Class 7 and believes she needs to take 'diksha' now. Surat-based Family to Become Jain Monk.

Talking to ANI about her decision, Khushi said, "In this world, the pleasure is for a short time and it's not permanent. I am 12 years old so I want to take a diksha." Several young children and people in their youth have given up a life of comfort and luxury to become Jain monks. Last year, a 12-year-old Gujarati boy had renounced family life and luxury to become a Jain monk. Bhavya Shah, the son of a diamond merchant, had become a saint in a ceremony in the presence of more than 500 Jain monks and 7,000 people.

Photos from the celebration ahead of the ceremony:

Diksha is a preparation for a religious ceremony that renounces worldly pleasures for a simple life. After becoming a monk, they discard all kinds of luxury in their life. They cover huge distances on foot, wear simple white robes and eat sparingly on what they receive as alms. They dispose of jewellery, clothes and cash in public. They focus more on inner peace and in strengthening it. Young monks are given proper guidance through which they learn the ways of ascetic life. The final diksha is generally preceded by various events like shobha yatra.

(The above story first appeared on LatestLY on May 29, 2019 08:58 AM IST. For more news and updates on politics, world, sports, entertainment and lifestyle, log on to our website latestly.com).