Earlier in the main event day, Vartika Singh, Miss Universe India 2019 made the country proud with her Top-20 finish. The 26-year-old who won the title in India to represent the country at the highest stage received much applause and appreciation. 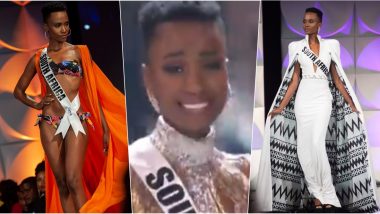 Zozibini Tunzi of South Africa is adjudged the winner of Miss Universe 2019 competition. She overtook Miss Puerto Rico – Madison Anderson and Miss Mexico  Sofía Aragón to win the crown and title at the 68th annual Miss Universe competition. Madison and Sofia were declared 1st and 2nd Runner-Up at the Miss Universe 2019. With Zozibini Tunzi's victory, the Miss Universe crown returns to South Africa after Demi-Leigh Nel-Peters had won it in 2017. Miss Universe 2019 is taking place at Tyler Perry Studios, Atlanta, Georgia, United States. After the Preliminary Round (Swimsuit and Evening Gown) and National Costume Contest on December 6, the highly anticipated grand finale is taking place on December 8 (early Monday morning for viewers in India). Miss Universe 2019 Final Live Streaming in IST, GMT & EST: How to Watch Beauty Pageant Live in India and Rest of The World? Get Date & Time of TV & Online Telecast.

Steve Harvey announced the final three names vying for Miss Universe 2019 crown and title and it is Miss Mexico, Miss South Africa and Miss Puerto Rico. The three beautiful ladies, Miss Puerto Rico – Madison Anderson, Miss South Africa – Zozibini Tunzi and Miss Mexico – Sofía Aragón waited to be declared as the Miss Universe 2019 winner. The other two took on the titles of 1st and 2nd Runner-Up. The three ladies were given one question (same to all) and as they answered, other two will be wearing noise-cancelling headphones. The question that would win Miss Universe 2019 crown was "What is the most important thing you should be teaching young girls today?" In fact, Steve Harvey also introduced a new feature in this year's competition. It is called the closing word, where the Top 3 were given a final chance to convince the judges to give them the title. Truly, Harvey style.

Earlier in the main event day, Vartika Singh, Miss Universe India 2019 made the country proud with her Top-20 finish. The 26-year-old who won the title in India to represent the country at the highest stage received much applause and appreciation. After failing to make the cut from Africa and Asia-Pacific region, Vartika still went on to become one of the 20 semi-finalists as a wildcard contestant. India would be truly proud of her achievements.

(The above story first appeared on LatestLY on Dec 09, 2019 08:39 AM IST. For more news and updates on politics, world, sports, entertainment and lifestyle, log on to our website latestly.com).