National Milk Day (India) 2021: Cow vs Buffalo Milk; From Nutritional Benefits to Consistency, Which One Should You Choose for Your Daily Needs

Dr. Verghese Kurien, who is called the father of White Revolution in India, was born on November 26 and therefore this day is celebrated every year as National Milk Day across the country. 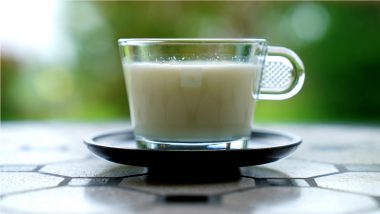 Dr. Verghese Kurien, who is called the father of White Revolution in India, was born on November 26 and therefore this day is celebrated every year as National Milk Day across the country. Milk is very important part of nutrition needed for human body. Milk is packed with nutrients such as Vitamin A, Vitamin D, Vitamin B12, Iron, Calcium, Magnesium, Zinc, Phosphorus, Iodine, Potassium, Folate, Protein etc. Along with this, milk also provides energy to our body.

The Indian Dairy Association (IDA) took the initiative to celebrate this day for the first time in the year 2014. World Milk Day is celebrated by the United Nations on 1 June every year whereas the first National Milk Day was celebrated on November 26, 2014.  When we talk about milk, the question that always crops up in everyone's mind is that which milk is better, cow or buffalo? Many people opt for cow milk as they believe it contains less fat than buffalo milk which is why buffalo milk is thicker.

Babies who are unable to consume mother's milk are often given only cow's milk. Cow's milk is thin and contains up to 88 percent water which makes it easy for babies to digest. A hundred grams of cow's milk contains about 88 percent water, while the water content of buffalo milk is about 60-70 percent.

If you have protein deficiency, then you should consider drinking buffalo milk. Buffalo milk contains 10 to 11 percent more protein than cow's milk.

Cholesterol makes up for the major difference between buffalo and cow milk. Buffalo milk is said to have less cholesterol than cow's milk.

Both protein and fat are high in buffalo milk. At the same time, both of these are less in cow's milk. You get 273 calories from a cup of buffalo milk, while 1 cup of cow milk will give you only 148 calories.

The amount of calcium is high in buffalo milk, while the amount of potassium and sodium in cow's milk is low.

(The above story first appeared on LatestLY on Nov 26, 2021 09:30 AM IST. For more news and updates on politics, world, sports, entertainment and lifestyle, log on to our website latestly.com).