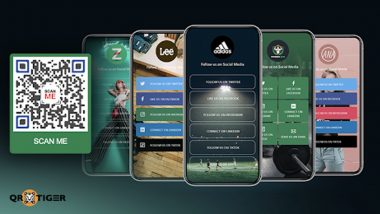 QR Tiger QR code generator, one of the leading QR code generators in the online market today, has recently launched its newest social media QR code solution targeted to brands’, businesses and influencers that aims to maximize their number of online followers.

The social media QR code solution altogether links the social media apps and other online resources of brands’ that display their social media profiles directly to the scanner’s smartphone screen when scanned.

The QR code solution is also beneficial to restaurants, FMGC companies, the Hospitality sector, advertising, storefront of retail, and many more. The innovative solution by the company makes it convenient and more accessible for people now to follow, like, and subscribe to the business pages or social media accounts of brands', retail stores, or influencers they would like to follow.

Moreover, the social media QR solution can also be printed to run an offline marketing campaign, such as flyers, magazines, brochures, or billboards. In print marketing, the user can still edit or update his QR code, and the changes will automatically reflect to the updated version when the QR is scanned.

Thus, it saves time, money, and effort as the user doesn’t need to reprint his social media QR code. Another feature of this solution is it allows tracking of the QR code scans to gauge the overall QR campaign performance.

He can unlock valuable data insights using the QRTIGER QR code generator (official website: qrcode-tiger.com), such as when he gets the most scans of his QR, the device used by his scanners to scan the QR code, and the location of his scanners.

Aside from making content, connecting with industry and thought leaders, paid advertising and sponsored posts, and staying consistent, using technology advances like a social media QR code is an effortless way for businesses to connect directly with their targeted audience and grow their followers and visibility online

As the digital climate continues to evolve it is clear that it will require initiative and hard work from those who wish to stay on top. One thing is for sure, however the space changes, it is certain that QRTIGER QR code generator will be there, leading the charge.