Revisiting the Heart of India - Jammu and Kashmir

This popular quote on Kashmir by Amīr Khosrow one of India's greatest Persian-language poets exemplifies the beauty of Jammu and Kashmir. Jammu & Kashmir is the essence of everything that is Indian-its culture, history, tradition, people, and natural splendor. 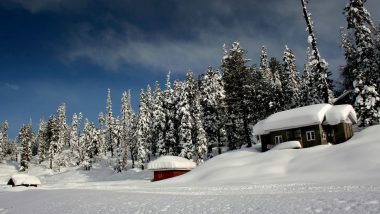 This popular quote on Kashmir by Amīr Khosrow one of India's greatest Persian-language poets exemplifies the beauty of Jammu and Kashmir. Jammu & Kashmir is the essence of everything that is Indian-its culture, history, tradition, people, and natural splendor. It represents the century’s old heritage of culture, religion, language, traditions, architecture and art forms. It is blessed with a fascinating topography that is a strange mix of rugged mountains, green hills, holy caves and rocky. It is said to be a treasure house of geological information due to the diversity of its geographical features. But we do see that terrorism and the occasional strikes called by separatists in the past especially in Kashmir have been the main causes why tourism potential has not been fully exploited. Another major cause is the lack of promotion of various regions as tourist destinations. According to economic survey the “tourism sector accounts for around 6.98% of GDP of Jammu and Kashmir. But amazingly it is not among the top 10 domestic destinations in the country based on the number of tourist arrival. Though the Kashmir Valley became the primary tourist destination for national and international tourists, Dal Lake and Gulmarg become an international tourist destination in the post Independence era. There is no comparison with the number of tourists in Kashmir Valley before. After 1947, tourism in the Kashmir Valley received a tremendous boost. Though violence since 1989 has affected the flow of tourists into the Kashmir Valley, some areas such as Gulmarg continue to attract tourists from all over the world.

Despite its tourism potential, the Jammu region has never been an attraction for international tourists. Over the last two decades, however, the Jammu region has witnessed a tremendous increase in domestic pilgrims, primarily to Mata Vaishno Devi’s temple, as part of what has now become the famous Amarnath yatra (pilgrimage).14 Rajouri and Poonch districts have numerous Sufi shrines and shrines worshiped by the Hindu and Sikh communities. Five shrines in particular—Shahdra Sharif (near Rajouri), Chota Mian (Mendhar), and Budha Amarnath, Sai Miran, and Nangali Saheb (all three near Poonch) have not only been the main attraction but have also inspired communal harmony. Shahdra Sharif shrine, in particular, has become a symbol of hope for the Hindu, Muslim, Sikh, and Christian communities. These shrines, particularly Shahdra Sharif, attract pilgrims from all over the country.

Though the government of India has also ramped up its efforts in the eye on developing manpower and promote exchanges between the tourist and the locals in the newly created Union Territory of Jammu and Kashmir, a special roadmap had been prepared, Union Minister of Tourism and Culture Prahlad Singh Patel. According to Patel, the government plans to rope in locals to promote tourism in the Valley. Under the 'Bed & Breakfast' scheme, the government will pay the locals who will offer food and shelter to tourists.

Jammu and Kashmir is really the heart of India. During these unprecedented times in India  Jammu and Kashmir appeared to be a place for solace, a place where people found calm amidst the raging storm. With the drop in covid cases J and K's tourism saw a boost. This calls for a rethinking of tourism and travel in Kashmir. Kashmir's beauty and its effervescence needs to be in the limelight. Focus should be on infrastructure development. State should also take steps to revive the traditional Handicrafts sector via new innovative methods. Some innovative ways of promoting Jammu and Kashmir’s heritage should be used so that its rich syncretic culture can reach to people. Tourism in Jammu and Kashmir depends greatly on the natural resources that this place has to offer for economic profitability. Tourism provides good sustenance to the local population and revenue to the State exchequer. The visits from domestic and international tourists provide a valuable source of earning. Visitors' spending generates income for both public and private sectors besides affecting wages and employment opportunities.

What sets apart Jammu and Kashmir from other tourist destinations in India, is an aura of authenticity, uniqueness, nostalgia and above all warmth. This place has the ability to talk and communicate through its scenic lands, lush greenery and its fascinating topography.