Joanna Borov, international model and influencer who gets more and more attention from media, just debuted at Miami Swim Week. As she said before it was on her long list of steps she would like to achieve. It looks like the Polish born model goes after her dreams and just completes tasks but it hasn’t always been busy. 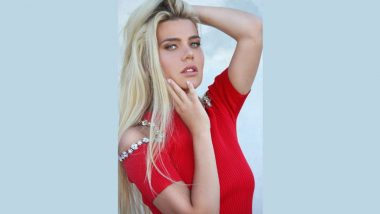 Joanna Borov, international model and influencer who gets more and more attention from media, just debuted at Miami Swim Week. As she said before it was on her long list of steps she would like to achieve. It looks like the Polish born model goes after her dreams and just completes tasks but it hasn’t always been busy. Her bumpy road from a fashion student in London working a few jobs at a time to one of the most recognized influencers based in Los Angeles is very inspirational.

One might say that 5.8 is tall, but in the modeling world is rather average. Most of the runway models are 6 feet and taller. Although Joanna is not very tall she has performed in the most prestigious fashion shows including Paris Fashion Week,  London Fashion Week, Miami Swim Week, LA Fashion Week. The designers has chosen her due to her unique face features, amazing walking skills, confidence and persistence. As she admitted, she applied for castings many times, hasn’t always been successful but she never gave up.

2. She had huge skin problems

As a teenager she suffered from acne. It was so bad at some point she didn’t want to go to school. With the right medical treatment she managed to cure the problem, but she is still very careful with the beauty routine and her diet. That’s one of the reasons she doesn’t wear makeup everyday and invests in good beauty products including La Mer and Kiehls.

3. She made a big change of plans

Joanna studied business law and started to work as paralegal in Poland. She didn’t like it and decided to give up on her legal career and explore fashion opportunities.  Following this decision she even moved out to London and started master’s program at University of the Arts London.

4.  She designed her first outfit when she was 5 years old

She has always been passionate about fashion. As a child she would spend hours for making outfits for her Barbie dolls. At the age of 5 with her mother’s help she made her very first dress. for herself. After years she started her own clothing line Jo Borov.

5.  She feels deep connection with the USA

The model and influencer lived and worked in different countries including the UK, France, Italy, Monaco, South Korea and Argentina. After exploring the world possibilities she said her favorite place is the USA.  She said that there are a lot of people in America with polish roots and also people like and appreciate her culture. There are so many polish restaurants and shops in NYC and Chicago, that one simply must tastes polish pierogis while in the USA. Joanna previously revealed that she never lets anybody say a bad word about the USA, so truly she is an American patriot.

6. She likes to wake up before sunrise

Life of a model can be challenging. Maintaining perfect figure requires a lot of effort. Joanna discovered a perfect routine that works for her. She likes to wake up sometimes as early as 5 am, walk her dog Chi Chi Boo, have morning coffee, light exercise and check her e-mails. “The day feels longer and I can complete some tasks that I wouldn’t be able to do later in the day” she said. Although, it’s not always possible due to traveling and frequent changes of schedule and time zones, when she stays in her home in Hidden Hills she loves to start her day early.

Joanna is a real bookworm. She has a great passion for literature and there are times that she would spend the whole day reading books. One of her favorites books is “Master and Margarita” by Michaił Bułhakow

8.  She loves to socialize but she recharges the best alone

Joanna attends top events and visits fancy restaurants on a regular basis but she loves her alone time also. As a zodiacal Pisces she needs her alone time which she often spends on the beach or hiking.

It’s not a surprise that she is a real shoe addict who loves high heels especially the ones with red bottoms but she is also a hat lover! She used to attend Ascot while leaving in London and Brough that elegant tradition to the USA.

10. Her dog Chi Chi Boo always travel with her

Joanna is a big animal lover ans rescued abandoned chihuahua during the pandemic. Since then he became her best friend who always travels with her and is being constantly featured on her social media.