Air New Zealand Unveils Sleeping Pods for Economy Class so You Can Take A Nap on Long-Duration Flights, Watch Video 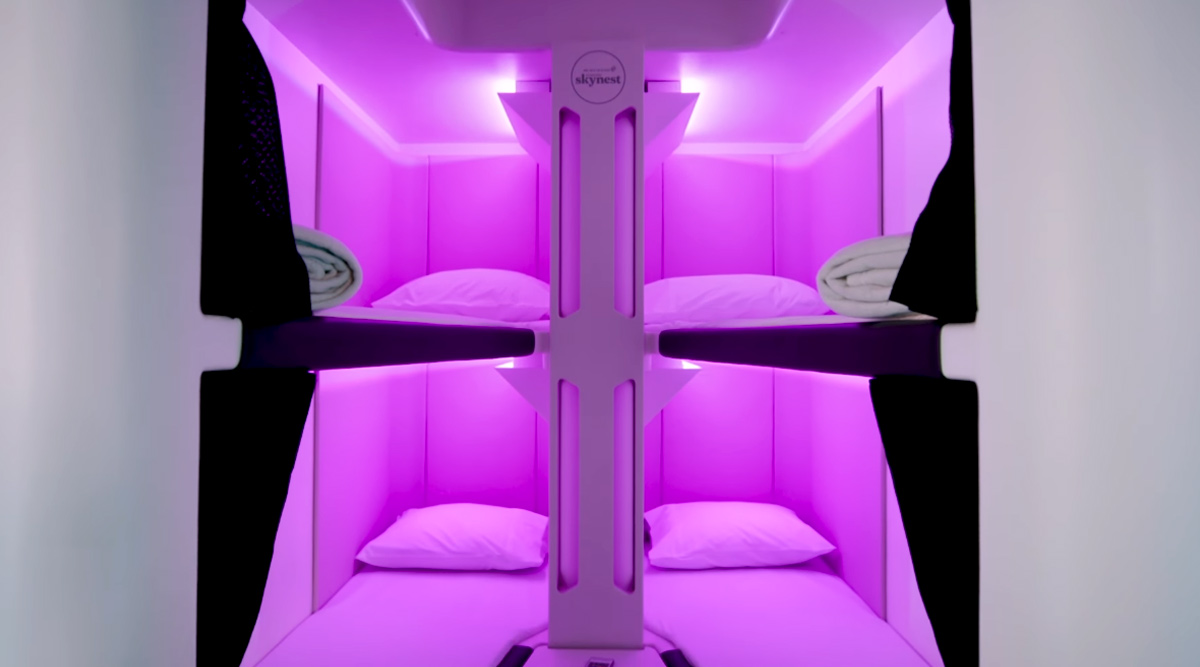 If you have been on long-duration flights then you know the back pain and fatigue that comes with it. Flights may be convenient for saving time but the seats are not comfortable, for the economy flyers. And now to make it better for a few flyers, Air New Zealand has unveiled their sleeping pods for economy class. So now you can take a snooze on your long-duration flight. Called the "Economy Skynest", the company has revealed the look and design of it in a video. Although not added in any of the flights yet, they Air New Zealand Introduces Edible Coffee Cups Onboard in a Bid to Reduce Plastic Waste.

Not everyone can afford flying business class and to make the economy class better, Air New Zealand is introducing sleeping pods. But not everyone can avail the benefit of these relaxing pods as there are only six seats like these. Each sleeping pods will be more than 200cm, while the width at the shoulder area will be 58cm. It will have a full-size pillow, sheets and blanket, earplugs along with privacy curtains and lighting designed for sleep. They are also exploring the possibility of including personal device USB outlet and ventilation outlet. Reached Airport Early? Take Off Early With Vistara Airlines' New Scheme to Board an Earlier Flight.

Here's a Video of Economy Skynest on Air New Zealand:

The most important factor, ie the cost of the pods is not yet revealed. And these pods haven't been added in any flight as yet. Mike Tod, Air New Zealand’s chief marketing and customer officer, said to a report, "We have a tremendous amount of development work underway looking at product innovations we can bring across all cabins of the aircraft. A clear pain point for economy travellers on long-haul flights is the inability to stretch out. The development of the Economy Skynest is a direct response to that challenge."

The Airlines operates some long-duration flight which include soon beginning Auckland-New York service at up to 17 hours 40 minutes one way. The decision about adding this Skynest to the flights will be taken next year after they study the performance of the inaugural Auckland-New York flight.