Man Walks on Frozen Baikal Lake in Russia, the Deepest Freshwater Lake in the World- Watch Stunning Video From Siberia

The lake is believed to have originated 20 to 25 million years ago and hosts rare species including plants and animals. 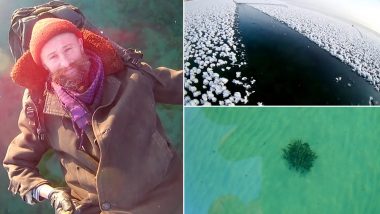 Lake Baikal, world's deepest lake at 1,700 metres, located in Russia has frozen. With temperatures dropping below average, the water has turned into ice putting on a stunning display. And a Russian man just recorded himself walking on the icy lake. The video of him walking on the Siberian ice has gone viral on social media with people exclaiming at the mesmerising water body.

The lake is believed to have originated 20 to 25 million years ago and hosts rare species including plants and animals. The man can be closely observing the underwater ice showing the frozen beauty inside. It looks like he is walking on a glass sheet with colourful materials embedded into it. He also zooms camera to show the underlying beauty mostly composed of multicoloured stones, and stunning flora and fauna.  Niagara Falls Freezes! Check Out Mesmerising Photos And Videos of the Icy Waterfall on US And Canada Border.

According to its official website, Lake Baikal contains 20 percent of the world's total unfrozen freshwater reserve known as the 'Galapagos of Russia'. It says its "age and isolation have produced one of the world's richest and most unusual freshwater faunas, which is of exceptional value to evolutionary science."

The lake is surrounded by hiking paths called the Great Baikal Trail leading to snowcapped mountains. The huge ancient lake is located in the mountainous Russian region of Siberia, north of the Mongolian border and is known for its rich flora and fauna. Wild animals, birds, various rare species are native to this land. In and around the region more than 1,000 species of plants, 2,500 endemic animals species reside.

(The above story first appeared on LatestLY on Jan 23, 2019 11:30 AM IST. For more news and updates on politics, world, sports, entertainment and lifestyle, log on to our website latestly.com).