Tuvalu Is Sinking! This Tiny Island Nation in Oceania Boasts of Stunning Lagoons and Coral Reefs, But Climate Change May Wipe it Out Soon

One of the world's tiniest countries and least visited, Tuvalu is a beauty untouched by the negatives of tourism. The place boasts of stunning, lagoons and coral reefs other than promising you a calming retreat. 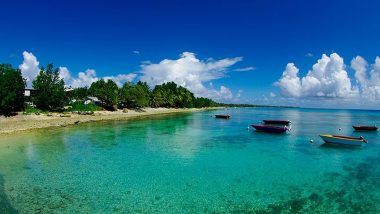 If endless blue waters lashing against white sand is your dream holiday destination, then you should head to Tuvalu, in the South Pacific. One of the world's tiniest countries and least visited, the island is a beauty untouched by the negatives of tourism. Funafuti is an atoll and the capital of the island nation of Tuvalu. The place boasts of stunning, lagoons and coral reefs other than promising you a calming retreat. It is an off-beat destination and receives about 1600 tourists each year. Standing on the rooftop of any house, you will be treated to coconut trees with the endless Pacific in the background. While the island has not yet swayed away with commercialisation, it has been affected by climate change. Last Chance Tourism: From Great Barrier Reef to Machu Picchu, 7 Places People Are Visiting Before They're Lost Forever Due to Climate Change!

Meanwhile, the tiny island nation is doing its bit to save itself from the effects of climate change.  It plans to be the first country to generate 100 per cent of electricity from renewables by 2020. There are also plans to start 'climate change tours' to showcase the projects they have started to thwart it. They have also started new solar panels, coral reef regeneration projects and increased mangrove plantations to cope with the change. They are largely focusing on ecotourism to focus on the importance of fragile, pristine, and undisturbed natural areas of the island. Last Chance Tourism: From Great Barrier Reef to Machu Picchu, 7 Places People Are Visiting Before They're Lost Forever Due to Climate Change!

This Gorgeous Piece of Land May Get Wiped Out Soon!

Being a low-lying island nation, it is in danger of being wiped off by rising sea levels. Cyclone Pam recently caused devastations to some of the outer islands. Tuvalu's Prime Minister Enele Sopoaga​ has been vocal about its vulnerability to climate change.

Tourists generally go to the main island of Funafuti as the only airport in Tuvalu is the Funafuti International Airport. While it is located just two hours north of tourist-savvy Fiji, the island has no tour guides or operators and no-related tourist activities. Visitors are issued with a free 30-day tourist visa on arrival with no departure tax. It was once a part of British protectorate called the Gilbert and Ellice Islands, however since it recieved independence in 1978, Tuvalu has been part of the Commonwealth.

Tuvalu has no ATMs or credit cards, hence people visiting the place have to carry enough cash to survive their stay. The local currency used is Australian dollar and Tuvaluan coins feature Queen Elizabeth II on one side and images from the local marine life on the other. There are plenty of places to stay including government-owned hotel other than family-owned guesthouses.

The best way to explore the island to rent a bike. There is very little traffic, hence people don't wear a helmet.  You can visit the outer atolls on the two passenger-cargo ships, which provide round-trip visits to the outer islands every three or four weeks. Not many crimes happen in the country, also there are no poisonous snakes, spiders or rabid dogs. Tuvaluan food is simple and tasty. Some of their specialities include fried chicken, fish dishes, pork, taro and papaya.

(The above story first appeared on LatestLY on Nov 16, 2019 03:00 PM IST. For more news and updates on politics, world, sports, entertainment and lifestyle, log on to our website latestly.com).