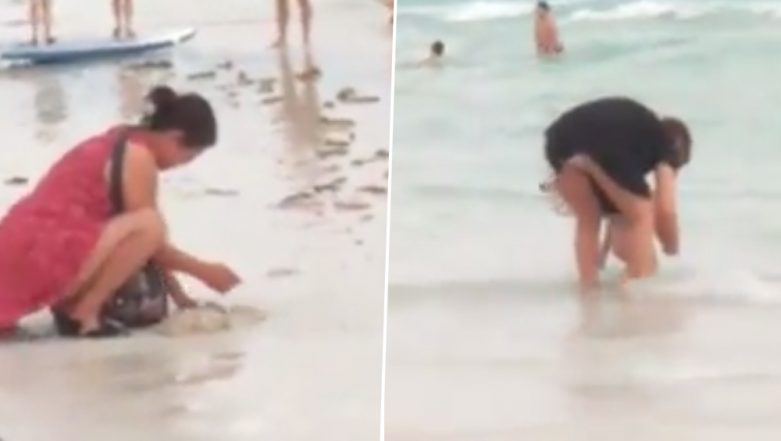 Boracay Islands, the pristine island in the Philippines is known for its clear shores and beautiful resorts. Lots of people turn up here each year to enjoy the white sands and beach vibes. But a shocking incident from the beach is causing an outrage about tourists in the region. A video shared on Facebook shows a child pooping on the beach, and a woman burying the diaper in the beach sand. The video went so viral, it caused a massive outrage about tourism. Now the popular beach tourist spot remains temporarily closed for the visitors to undertake a clean-up operation. Tourist Couple Wash Butt With Holy Water at Bali Temple, Viral Video Causes Outrage.

Meanwhile, there is probe ordered on the tourists that were seen in the viral video and they may face charges too. Presidential spokesperson Salvador Panelo was quoted in a briefing, "Well, there are rules and regulations in that place. So everyone is expected to – whether foreigner or Filipinos tourists alike, whatever – they have to follow rules and that obviously is a violation so they would be subject to suits." Tourists Wake Up Sleeping Panda at Chinese Zoo by Throwing Stones, Shocking Video Angers Netizens.

The video has close to 8 lakh views and everyone slammed the actions of the tourists in the comments. Following the massive outrage about the disgusting actions of the tourists,  the Boracay Inter-Agency Task Force (BIATF) cordoned off a portion of the beachfront. The signboard here reads, "Temporarily closed for swimming. (Clean up ongoing.)." The water samples will also be checked and tested to see if the water quality is restored to a safe level.

While the action of the tourists is indeed shameful, the authorities are doing their best to maintain the quality of the tourist spot. It serves as a great example for other places and countries who too could ensure such strict action and discipline towards protecting the tourist spots. In India, for example, the beaches are ridden with plastic waste and dump. Thus people avoid going to the beaches because of the water quality and wastage. But in Boracay, authorities are ensuring not one such issue occurs and taking all measures to make the beach accessible to tourism again.