Bangtan Boys recently, safely returned to South Korea after finishing their activities in the United States. V aka Kim Taehyung showed off his wide range and versatility in singing, dancing and fashion during the trip to the Las Vegas concert and at the Grammys 2022. 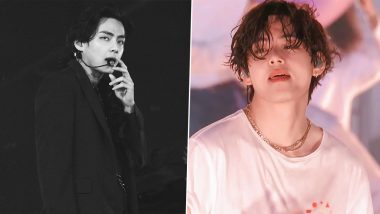 The world-famous band BTS closed off their tour to the United States and pulled off a successful "Permission to Dance on Stage" Las Vegas concert at Allegiant Stadium. V, who has been sharing clips of playing golf in Las Vegas also wore some of the best outfits at Grammys, which made him the "God of Visuals". From looking effortlessly good in a white, casual outfit to making everybody swoon with the one strand of hair that swooped down his forehead on the Grammy red carpet; For the whole tour, the ARMY was in for a treat! And why wouldn’t they be after all Tae Tae looked best of himself! The gorgeous and aww-worthy visuals of the Gucci Boy were all over the internet! Videos and GIFs of the wet hair look due to the hot Las Vegas weather and photos of the Winter Prince checking the main character's vibe in the United States have made everybody believe that it is Kim Taehyung's world and we are simply living in it! BTS V aka Kim Taehyung Deleted Instagram Stories Are HERE! Check Pics and Videos of Tae Tae That Will Definitely Perk Up Your Mood.

Have a look at all the super adorable videos and photos of the world's handsome man, to boost your mood! First, let's start with all the pictures that Kim posted from his official Instagram account. ARMY, here you go: BTS V aka Kim Taehyung SMASHES Instagram Records, Excited ARMY Says, ‘Everyone’s a Gangsta Until the Real Gangster Arrives’.

5. How Can We Miss V's Airport Look

8. The Kim Taehyung Collage Is All We Need To Live

Images © - To All rightful Owners Thanks💜 pic.twitter.com/GutYbpRszH

Kim Taehyung @BTS_twt is always being his best & giving his best. Just the last 3 weeks alone - at the grammys & the 4 concerts, Kim Taehyung proved over & over again that he is the king of the stage and an amazing artist!! Plus a beautiful human being inside & out!! #V #BTSV pic.twitter.com/dok7HkgM9Z

Hence, now you see why Kim Taehyung deserves the "Most Handsome Man" title! Whether it is a concert with a million crowd or a casual day trip, V just has an innate sense of fashion and personality that comes out with every look.

(The above story first appeared on LatestLY on Apr 25, 2022 09:00 AM IST. For more news and updates on politics, world, sports, entertainment and lifestyle, log on to our website latestly.com).