After Slamming Donald Trump in a Fierce Tweet, Cardi B’s Response to a ‘Conservative’ Columnist Dissing Her ‘Twerk’ Video Is Winning Hearts 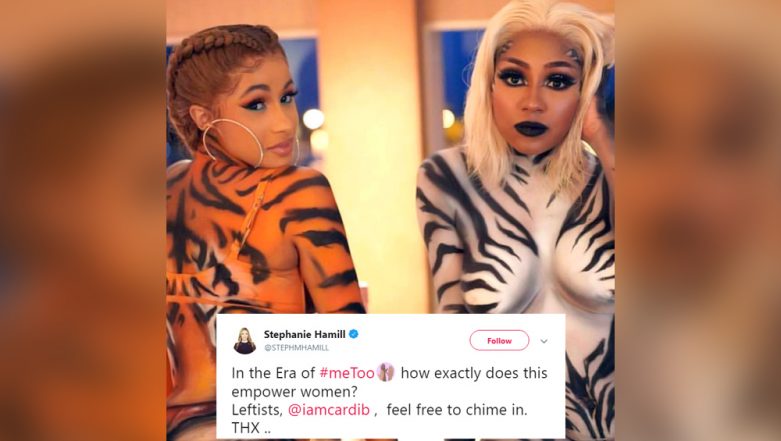 Cardi B has always spoken her mind like no other in the industry. Be it about her implants, surgeries, her baby, boyfriend Offset, or general quirky Cardi B clap-backs on Instagram, Cardi B doesn't hide. She doesn't even shy away from talking about topics such as slut-shaming, feminism, not even DONALD TRUMP! Her recent conversation on Twitter with Stephanie Hamill is surely some inspiration on how to give it back to the haters. Cardin B's "Twerk" is giving way to political debates. A "conservative" columnist attempted to turn "leftists" against Cardi B's appearance in the City Girls' music video "Twerk." The conservative personality from Washington D.C.'s local Fox news channel went on to say on Twitter that Cardi B's music video contradicts #MeToo movement. Her Tweet read- "In the Era of #meToo how exactly does this empower women? Leftists, @iamcardib, feel free to chime in.

In the Era of #meToo how exactly does this empower women?

While it clearly seemed that Hamil was trying to spin political debate, Cardi B didn't brush it off. Cardi B being Cardi B chose to respond directly on Twitter to Hamil, writing, "It says to women that I can wear and not wear what ever I want. do w.e [sic] I want and that NO still means NO. So Stephanie chime in..If I twerk and be half naked does that mean I deserve to get raped and molested ? I want to know what a conservative woman like you thinks[sic.]."

Take a look at the clapback tweet made by Cardi B.

It says to women that I can wear and not wear what ever I want. do w.e I want and that NO still means NO. So Stephanie chime in..If I twerk and be half naked does that mean I deserve to get raped and molested ? I want to know what a conservative woman like you thinks 🤔 https://t.co/8UBQQzO6jK

'The conservative columnist' to this replied in agreement saying "I agree, No means NO, NO MATTER what! But this video, & others like this sexually objectify women. I think this hurts all women & the cause. We're not sex OBJECTS!" After which invited the rapper to hash it out on TVAt. Amidst all this a rapper Wale, made a hilarious comment saying to Hamil, "Just say you jealous that u uncapable of such coordination and rhythm and kindly let leave the podium," to which Hamill responded, "LOL.. You're right. I def don't know how to TWERK."

Cardi B was recently all over the headline for finally talking about politics and calling out Donald Trump in a viral video of hers where she "I just wanna remind you that it's been a little bit over three weeks, Trump is now ordering federal government workers to go back to work without getting paid," she went on to say "I know a lot of y'all don't care because you don't work for the government, or y'all probably don't even have a job, but this shit is really f*cking serious, bro. This sh*t is crazy. Our country is in a hellhole right now. All for a f*cking wall."

Take a look at the video of Cardi B speaking about Donald Trump that went crazy viral a few days ago.

I know a lot of ya do r watch the news so I’m letting ya know shit getting real .....I ain’t going to say nothing much tho I don’t want mofos to off me.....ANYWAYS TWERK VIDEO OUT NOW

Cardi B didn't stop criticising the US President Donald Trump, she claimed that decisions taken by Trump are "destroying" the country (USA) as the partial government shutdown nears a month. The 'Money' rapper wrote in response to Fox Nation host Tomi Lahren's tweet saying, "You’re so blinded with racism that you don’t even realize the decisions the president you root for is destroying the country you claim to love so much. You are a perfect example on no matter how educated or smart you think you are you still a SHEEP!" the 'Money' rapper.

However, it didn't stop very soon and she found herself in new criticism to her recent venture into politics. After her tweet to Hamill, she tweeted another message to any critic that read- "All these conservatives been harassing me and telling me the most disgusting things these past few days," Cardi wrote on Twitter. "Listen I’m not telling ya to turn liberal all I’m saying is to admit that your president is f*ckin up this country right now! Liberal or conservative we ALL suffer as citizens."