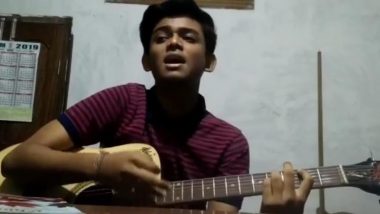 Bengaluru, July 11: A teenager in Assam died after his two-year-long battle against aplastic anemia, a rare medical condition in which the body stops producing new blood cells. After his death, the netizens were left heart-broken by recalling his soulful singing skills. His videos - in which he could be seen singing from hospital beds - were watched by scores of social media users over the past 48 hours. Akhil Gogoi, Jailed Assam Activist, Tests COVID-19 Positive Day After Being Declared Negative.

The deceased, identified as Rishab Dutta, was only 17-year-old as he departed this world on Thursday. He belonged to Kakopothar in Assam’s Tinsukia district. He was earlier treated at Christian Medical College in Vellore, followed by a private hospital in Bengaluru.

Video of Assam boy's rendition of Channa Mereya of Ae Dil Hai Mushkil goes viral after his death. Internet is teary-eyed Rishab Dutta from Assam died. Video gone viral on social media after his death. Two years ago, Rishab was diagnosed with a rare condition of Aplastic anemia. pic.twitter.com/CggIW4hyD5

During his treatment, Rishab would often leave the medics shocked with his soulful singing. In the videos shared on social media, he could be seen singing while doctors and nurses are seen admiring his skills. His kin remember that the boy aspired to be a professional singer someday.

(The above story first appeared on LatestLY on Jul 12, 2020 12:32 AM IST. For more news and updates on politics, world, sports, entertainment and lifestyle, log on to our website latestly.com).