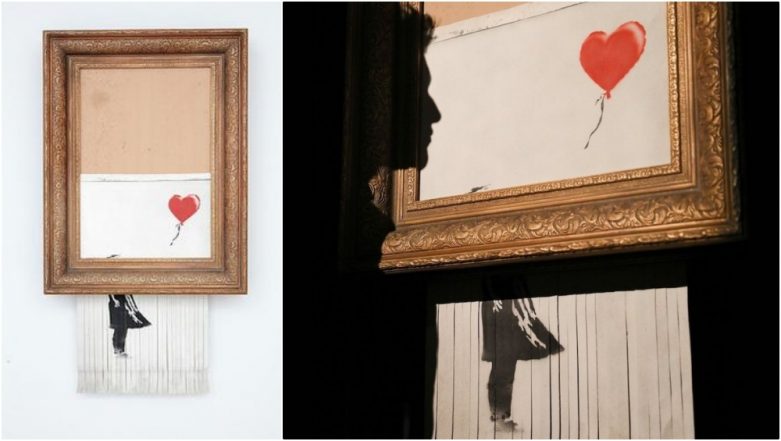 Love is in the Bin (Photo Credits: Wikipedia Commons)

Berlin, February 5: Anonymous British street artist Banksy' painting "Love is in the Bin" will open for public display on Tuesday at a gallery in Germany, for the first time since it shredded itself during an auction last October. The partially destroyed artwork will be displayed at the Frieder Burda Museum in Baden-Baden, CNN reported. Amedeo Modigliani’s Nude Painting “Nu couché (sur le côté gauche)” Raises More Than $157 Million at Sotheby’s Auction.

Banksy shocked the art world last October when the 2006 painting slid into a shredder hidden inside its frame just seconds after selling at an auction at Sotheby's in London for $1.4 million.

Footage from Sotheby's London showed the concealed device coming to an abrupt stop, with the anonymous artist later suggesting that he had intended for the artwork to be entirely destroyed. Frieder Burda Museum's Director, Henning Schaper, told the media on Monday that his staff had opened the frame to remove the shredder and batteries ahead of the exhibition.

Watch Video of Love is in the bin: Banksy-Schredder-Werk in Deutschland zu sehen

The painting is being displayed with its strips hanging from the bottom, just as it appeared at the auction house before being carried away by officials. Previously known as "Girl with Balloon", the artwork shows a girl reaching for a red heart-shaped balloon and was based on a 2002 mural by the artist. t was renamed after the auction. Banksy’s Famous ‘Girl with Red Balloon’ Painting Self-Destructed After Being Sold at London Auction (Watch Video).

The painting's owner, who is identified only as a "European art collector" by the German museum, proceeded with the sale amid speculation that its value may have increased as a result of Banksy's intervention.