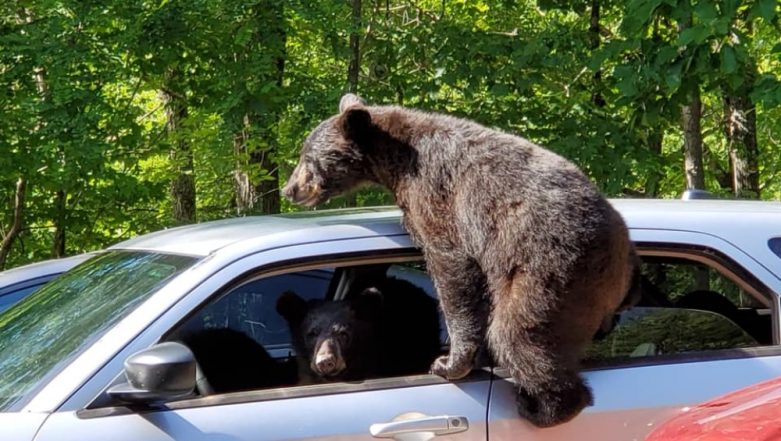 Chad Morris, owner of CMO BarberShop in Owensboro, Kentucky will never leave the windows of his cars open again in his life. Chad who was in Tennessee, the United States posted photos of three cubs who sitting inside his car with the momma bear lurking around outside. Chad was unloading the car at their rental cabin in Gatlinburg when the bears entered it. One of the bears who was in the driver's seat was even trying to drive it. Wild Bear Bribes a Pet Dog With Deer Bones To Eat Family's Trash in Ontario, Funny Tweet Goes Viral.

He posted pictures on Facebook with the caption, "Is this real life.. tell me we are being punked, 3 bear cubs in my car and the momma just lurking!" Chad told 14 News that he couldn't believe that the bears were actually in his car. He was quoted as saying, "I was telling my friends, I want to see a bear, I want to see a bear you know? Been lifting weights a little bit, want to see a bear, tussle with a bear and it was like well, you get four on one, now what do you wanna do big boy? And I was like nah, I'll pass." Brown Bear Pelted With Stones, Falls Into River in Jammu and Kashmir; Authorities Launch Search Operation After Video Goes Viral.

While Chad had been waiting to see a bear, he couldn't believe his eyes on seeing bears in his car. He kept a safe distance from the bears, eventually, they lost interest and left the vehicle. Fortunately, his car suffered only moderate damage. He said that after the bears left, he rolled the windows up. The bears also investigated his father's car, tore the driver's seat and left a claw print on his son's football.