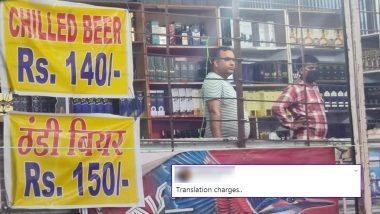 At a time when most people are making do with lower income, a discount while making a purchase comes as a blessing. It could be a few bucks but who wouldn't say no to paying a little less? Getting Rs 10 off a beer is a big thing for anyone who loves drinking beer and would want to get their hands on a bottle right now. But it would obviously be puzzling if you see the same bottle being sold for Rs 10 because it is chilled but in Hindi. A picture of a liquor store banner has been shared on Twitter which states Chilled Beer would cost Rs 140 whereas a Thandi Beer (which means chilled) would cost Rs 150. What? Yes, that's exactly what the users are asking. Two Grandmothers Demand More Beer and Wine During Lockdown, Wish Gets Fulfilled After Pics of Them Holding Plea Signboards Go Viral.

We come across a lot of funny billboards and signs in India. Some of them have ridiculous spelling attempts others can be just too flashy. But this one, advertising a chilled beer makes no sense. Because both Chilled and Thandi (cold in Hindi) mean the same unless the owner is probably selling two different brands of beer and coined them separately. But for those who have seen it at first glance, it is too funny. People have given funnier reactions to the picture. Tired of Political Hoardings in the City, Kalyan Residents Mock Netas With Dog's Birthday Banner.

State of this country. 🤦 pic.twitter.com/xnAEaxrZWp

The Charge is For Mask

Thandi beer served by the man in mask. Chilled Beer by the one without mask.

It is not known from where this picture has been taken but just enjoy that somewhere in this country if you ask for a chilled beer, you are going to save Rs. 10. So chilled or Thandi, what do you prefer?

(The above story first appeared on LatestLY on Jul 09, 2020 08:55 AM IST. For more news and updates on politics, world, sports, entertainment and lifestyle, log on to our website latestly.com).