Binod is Love! From Tinder to Swiggy, Everyone is Obsessing Over the Viral Funny Meme Trend, Check Hilarious Tweets

Binod is here, there and everywhere! Binod is now trending on international platforms for reasons unknown to them too, well, lucky Binod. The latest to join the bandwagon is Netflix, Amazon and Tinder. After all the funny memes and GIFs on Binod's attempt to garner attention Tinder thinks Binod is looking for a match! 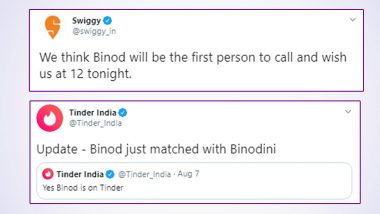 Binod is here, there and everywhere! What caused Binod to trend is something only netizens will understand and hard to explain. Long story short, Binod is now trending on international platforms for reasons unknown to them too, well, lucky Binod. The latest to join the bandwagon is Netflix, Amazon and Tinder, how could they manage to live without tweeting about Binod until now is a little worrying though. However, Binod has lured them too and everyone is after him. After all the funny memes and GIFs on Binod's attempt to garner attention, Tinder thinks Binod is looking for a match! Isn't Binod complete in himself, then why to worry for a partner, whatever be that, Binod is now planning to go out on dates with Binodini. Well, good luck on that and considered COVID-19 situation, we would request you to postpone that plan. Binod Funny Memes and Jokes Are Trending on Social Media but Who Is Binod? Know About This Latest Viral Trend Over YouTube Comments.

As Binod is becoming famous, Armaan is trying to get fame using the same tactics. Armaan's efforts became so evident that Netflix India had to tweet about him.

Here's What Netflix Has For Binod:

In addition to the appreciation for #Binod, let us not forget another hero, Armaan, who has commented this on every tweet of ours for the last year. https://t.co/DNpf4CC36i

Rahul is out of the picture, we believe in 2030 Binod will be the new household names. Why else will Amazon Prime replace Rahul with Binod?

everyone is binod, everything is binod pic.twitter.com/7yyVHK8CEJ

Swiggy became best friends with Binod in the meanwhile and is even wishing them birthday before anyone else.

We think Binod will be the first person to call and wish us at 12 tonight.

We want to know what the real Binod has to say about this or maybe Binod doesn't know that he is trending. Does he know he is trending or is he just commenting his name everyone like he used to?

(The above story first appeared on LatestLY on Aug 12, 2020 01:38 PM IST. For more news and updates on politics, world, sports, entertainment and lifestyle, log on to our website latestly.com).